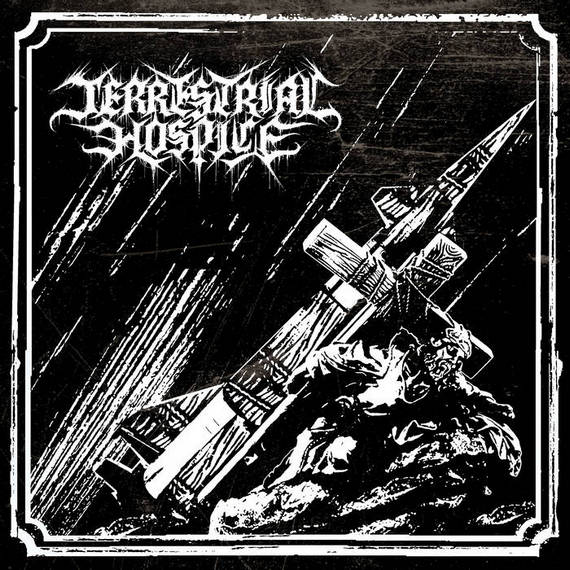 When Polish giants decide to release Black Metal with Thrash undernotes, apocalyptic sounds and visions that should bring extermination thoughts immediately then something big comes around the corner.

Terrestrial Hospice is the name and features Inferno of mighty Behemoth, Azarath, Witchmaster and so forth and Skygge known for Tortorum, Thunderbolt, Gorgoroth and many others, so there is much to expect from such veterans.

In 2018 the two released their first EP “Universal Hate Speech” which was a good example of versatile, dark antihuman Black Metal and deserved the title quite well.

You can hear Inferno’s signature drumming, more subtle when needed and not shy to play simple grooves when required but is more than able to increase the legions to attack without mercy. On the other hand we got Skygge who’s voice is pure hate, full of rage and disgust for the human race. His riffing creates very dark, menacing and claustrophobic clouds with attention to details, be it in the rhythm guitar, bass or the leads and layered riffs. There is a lot going on If you listen carefully. The aura created reminds a lot of works of Thunderstorm, paired with some Deus Mortem and Tortorum moments.

“Gang-Raping the Seven Virtues” for example is a great example how a song can be mid-tempo, have an entrancing vibe with a lot of variation and never feels boring, just pure blackness and the longest track of the record. The record finishes with a forward driving catchy track, “Crucifixion of Antropocentrism” which is aggressive, pushing and punishing. Inferno throws some old school blasting in and Skygge some brutal riffs and chants.

Apocalyptic winds are more present than ever, and “ Indian Summer Brought Mushroom Clouds” is a damn great debut album and strong contender for Black Metal album of the year. Not even half 2020 has past and already tons of great records, going to be tough at the end of the year. (DPF)