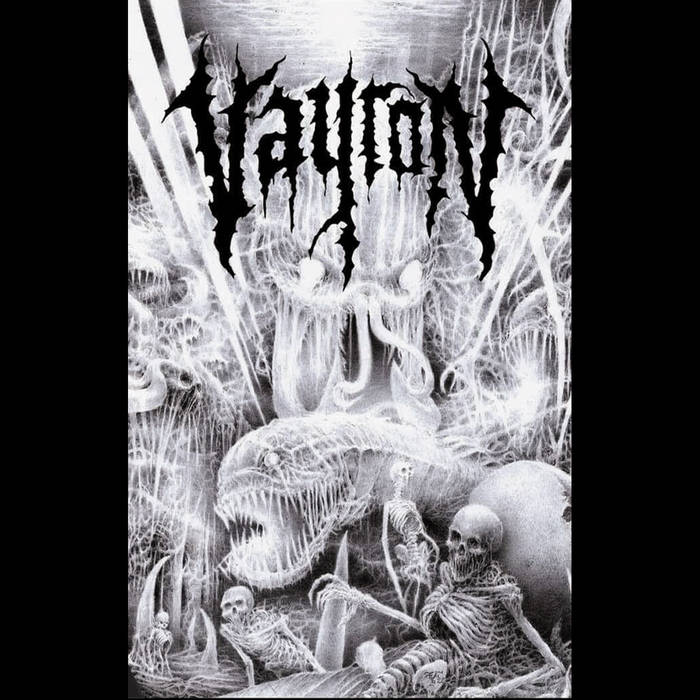 A debut release to go into the pantheon of French Death Metal. Bergerac based quartet Vayron (Who feature members of Silure) have unleashed a very impressive four track demo release which has been picked up and released on cassette through Visceral Circuitry Records. Opening track ‘Fanatic’ is a bludgeoning slab of gnarly yet technical Death Metal, replete with mesmerizing guitar solos and chugging riffs, steely guitar leads and a punishing drumming style that borders on the belligerent. Plus of course a more than healthy dose of bass rhythm. Most impressive about this track is when Vayron open the taps on their more groove drenched side and create some very catchy rhythms whilst maintaining their heavy stance. These rather robust and up front characteristics continue into the fast and direct sounding ‘Drunk’, though still with a little time for a slight melodic twist and more than a nod to the guitar playing chops of a certain Floridian gore obsessed band we all know and love. Penultimate track ‘Power’ is a savage slice of catchy, short and snappy Death Metal that really rolls out the brutality of the band. (I’m also loving the simple but effect message these songs names are spelling out) Finally the demo is brought to an end by ‘Dirty’, a chugging ode to barbarity that makes sure the demo climaxes in the most powerful of ways. This is a really impressive demo, and I hope the band have more in the offing soon.