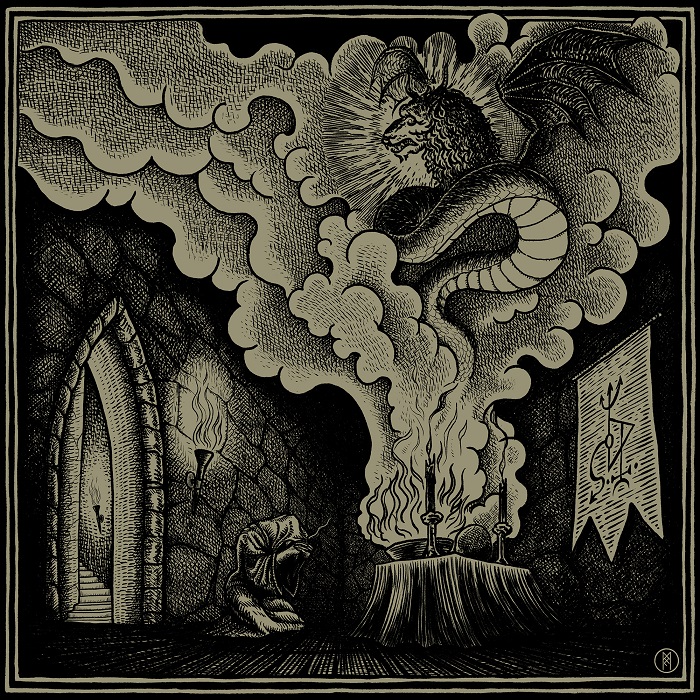 Not long ago on these VM-Underground pages, I reviewed Ofermod’s latest full-length album, ‘Mysterium Iniquitatis’. In it, I dwelled at length on the band’s history and the undeniable importance mastermind Mika ‘Belfagor’ Hakola had and still has on the contemporary Black Metal scene, especially that of Sweden. Without overstating the case, it can definitely be said that without Belfagor’s visionary work, Watain would not have existed and his creative hand in numerous other bands would also be sorely missed.

I also wrote that ‘Mysterium Iniquitatis’ was the last album with vocalist Nebiros, who bid farewell to Ofermod after a long record. That also means that ‘Ofermodian Litanies’ became an entirely solo work. At least, the first two songs. Because this EP consists of only two new songs and is further supplemented by the two tracks that already appeared on the ‘Serpents’ Dance’ 7″ EP (2014, The Ajna Offensive) as well as a previously unreleased version of ‘Tiamtü’ from the 2008 album of the same name (Norma Evangelium Diaboli).

‘Mysterium Iniquitatis’ was already taking Ofermod cautiously into new territory. Still it was the ingeniously crafted riffs with slightly dissonant character that took on the equally contrary and virtuosic rhythms and over which Nebiros’ poured his husky and rough vocals. But very slowly, the sound was already becoming less inaccessible. That trend continued on ‘Ofermodian Litanies’. Belfagor has made its riffs a little less impenetrable and traded that for a sound a little easier to handle. Also completely new are Belfagor’s own vocals, and he does this quite well, the more standard raspy vocals fit the new Ofermod sound perfectly. The drums, by the way, are still of the same cloth, this time it is Simon Schilling (currently of Marduk and Eucharist, ex-Belphegor) who impressively hammers the whole thing together. All in all, the result is actually downright stunning. This is modern Swedish Black Metal of another level. Although Ofermod, partly due to a glorious role by producer Magnus ‘Devo’ Andersson, sounds quite different from its previous albums and especially compared to its influential early work, Belfagor’s musical signature is unmistakably recognisable. A litany is a prayer to God for a gift or healing. If this then is a litany to Ofermod then I can only hope Ofermod will bless us with more of this.

I can still remember how excited I was when I first sunk the needle into the grooves of the ‘Serpents’ Dance’ 7” EP upon its release. Hearing it now, especially after those first two new songs, these tracks do sound a bit less sparkling. The production is duller and, despite the intricate riffs and rhythms, gives it a slightly less dynamic feel. It sounds a bit more chaotic, but also darker. And therein lies the strength and charm of these tracks. Though I don’t have a clue why, but the songs are placed on this EP in reverse order of the original 7” EP. The last added ‘Tiamtü’ is an especially fuller-sounding version of the original that appeared on the debut album, it is not entirely clear to me whether this is a re-recorded song or how this version of the song came about. The original has a somewhat thin sound, which, together with Nebiros’ rough vocals, provided a powerful contrast and formed that distinctive Ofermod sound. On this new version, a heavier sound has been added and has a much more brooding atmosphere. While it’s nice to hear the song in a different way for once, I still (as usual) value the original the most.

Coming back to the two new songs, I think that with the run-up that Ofermod has embarked on with ‘Mysterium Iniquitatis’, a more than interesting new direction has been taken. One in which I am especially curious to see where it will take the band. Incidentally, I can’t quite shake off a small Anvil-like feeling. Although Ofermod never pursued success as desperately as Anvil, a parallel can still be drawn: they influenced Metallica and helped spark their fame but were unable to hitch a ride on their immense success themselves. Like this, Ofermod was at the cradle of Watain but never had that great success themselves. But, interestingly enough, with these two new songs of great quality and the extremely weak last Watain album, it can without any doubt be said that Ofermod has now well surpassed Watain again. (FelixS)

Swedish one man Black/Death Metal project Ofermod has been active since the mid 90’s but is enjoying its most prolific period to date. On the back of his 2021 album release ‘Mysterium Iniquitatis’, Belfagor has returned with a follow up EP of roaring tyrannical sounds in the form of his ‘Ofermodian Litanies’ EP which like his previous album will see the light of day through Shadow Records, on both CD and LP. In truth there is little to tell about this EP. It features five well performed tracks of imperial and triumphant sounding Blackened Death Metal, five tracks of unrelenting hostility and similar to the work of both Behemoth and Dimmu Borgir. (If they adopted a policy of way more subtle synth play than they currently use) Of particular interest are the barbaric sounding guitar leads that come to the fore during ‘A Million Serpents Dance’ which intensify the never ending evilness and bleakness of the release, whilst the onrushing, crushing brazenness of the drumming cacophony during the aptly named ‘Chaos Reverberation’ marks the EPs most savage peak, but contrasts this with the releases most groove drenched parts too, lead by rumbling rhythmic bass play. Overall, A deliciously dark and brutal EP with a one track mind. (Marksson)