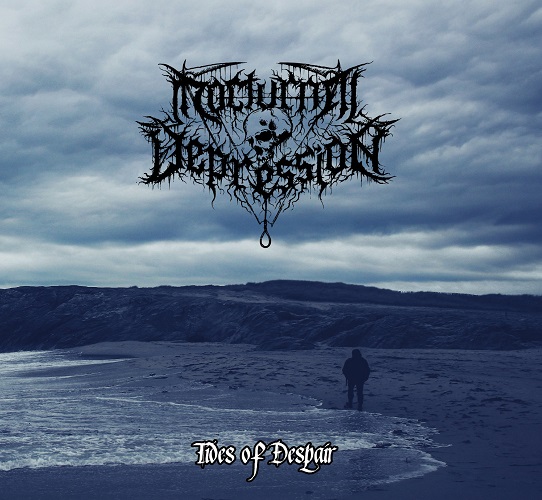 Forming in the year 2004 in Grenoble, Auvergne-Rhône-Alpes, France, Nocturnal Depression have been providing us with some of the most inclusive, progressive and actually interesting Depressive Black Metal ever heard. In their fifteen years of being in this, their wretched existence, they have been quite productive; with five demos, one EP, eight split contributions and nine, count em, nine full lengths, with “Tides Of Despair” here being the newest of all of them. I first heard of Nocturnal Depression back in 2006 from their demo “Four Seasons To A Depression.” That demo impressed me then with it’s take on the Depressive Black Metal sub-genre, which at the time was a lot less varied, original and interest holding. That is not to say that it wasn’t those things when compared to other bands within the subset but it is much less so when compared to their new output here.

Speaking of that inclusive, progressive, varied, original and interest holding Depressive Black Metal sound that I have mentioned Nocturnal Depression having above, well, we may as well discuss a bit what I mean there. First off, for those of you not familiar with Depressive Black Metal as a whole, let me tell you, for the most part it is extremely derivative, unoriginal and just plain boring as all hell. There are plenty of bright spots within the sub-genre and Nocturnal Depression may just be the top of the heap. They are not afraid to bring in outside influences and meld them into their sound seamlessly. They are able to make the droning sections much more impactful when paired with the more nuanced, progressive and active sections. These things combine to make them one of the, if not the, most original an interesting band in the sub-set. This is not some mere Burzum-ish worship set to repeat with shitty production, no, this band is something much, much more.

I chose this album to review because it had been a while since I have had heard anything from Nocturnal Depression and was curious to see how they have progressed. Well, I have to tell you, I am pleasantly surprised. Unlike most of the sub-genre, this band has been able to grow and evolve beyond the trappings of old and come out the other end as a band who has hung on to their roots while bringing in more spice and sugar, with a dash of catchiness. “Tides Of Despair” eschews its title and subject matter in the sense that the music within is hopeful and alive with greatness.