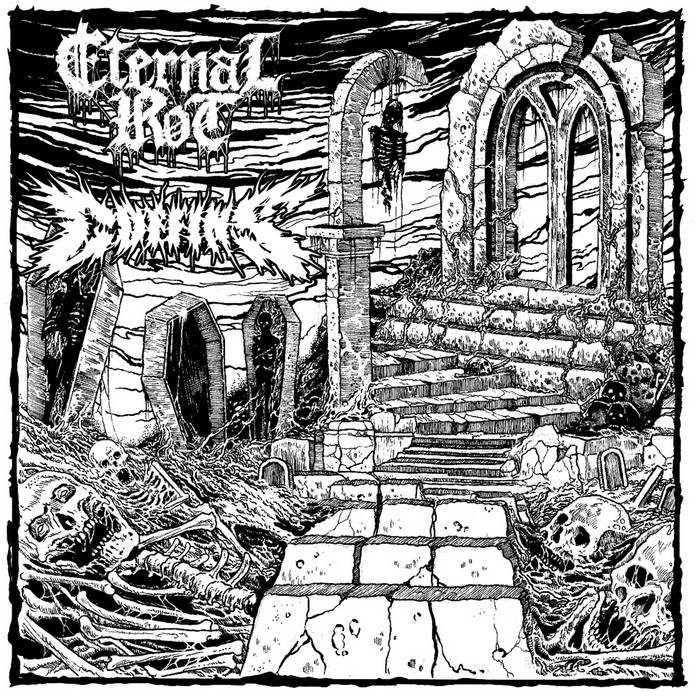 Coffins should require no introduction, not only have they released a couple of outstanding full-length album, they also left a trail of various (split) EP’s behind them. With this split LP with Eternal Rot they are adding one more to their impressive output.

The Polish/British collective of Eternal Rot kicks off with two of their ultra-heavy and snailish Death Metal. People who heard their demo/7” EP or their two albums know what to expect. In case you are new to the band, expect a full-blown fuckfest with Mortician doing Disma on downers. Utterly heavy, grinding guitars, immensely deep guttural vocals and simple as fuck drums. While I had some trouble keeping my focus with this one-dimensionalism for an entire albums it works just perfectly on such shorter releases. If you really hate your neighbours, play this on maximum volume, then I am sure they will call the real estate agent and initiate the move. Or they will call the asylum for you, that is also possible.

While Eternal Rot offered two entirely new tracks, Coffins comes up with a 2019 rendition of ‘Evil Infection’, which appeared on their second album (‘The Other Side Of Blasphemy’) from 2006. Though I usually think it is a little lame to re-use older material for a new release and I am generally not a fan of re-recordings, this newer version kind of works. Coffins polished their sound over the many years, going from a rather murky and raw sound, much in the vein of Cianide, to a solid sounding kick in the teeth on their newer albums (‘Buried Death’ and onwards). On ‘The Other Side Of Blasphemy’ they still had that charmingly raw sound, which suited them perfectly at the time, but I am not sure whether taking the track out of its natural environment and pour it into a new sounding mold is exactly the best of ideas. As an extra you’ll get the obligatory cover, this time it is Nihilist’s ‘Carnal Leftover’ that’s getting the Coffins treatment, and as always it sounds just like a sledgehammer blow.