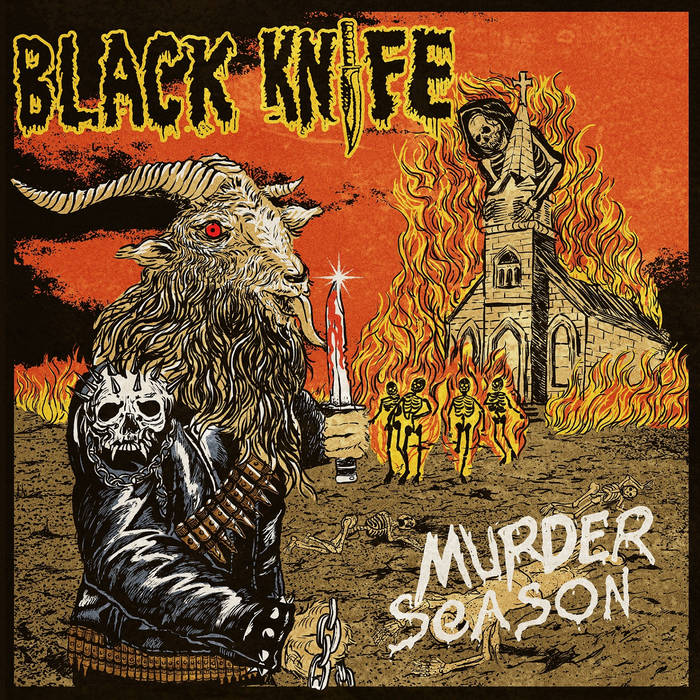 I first heard US Punk influenced Black Metal band Black Knife on their recently released Wise Blood Records four way split release, ‘Faster Than The Fucking Devil’, and have been a fan ever since. Guitarist/Vocalist Hellwulv was also a delight to interview and you can read that elsewhere on this very sight. So much of a fan am I that I had to step back by a whole year so I could review the bands sophomoric full length opus, the brilliantly entitled ‘Murder Season’.

Do not sleep on this album, because it flies by at light speed in a haze of alcohol fuelled horror tropes, violent beats and maniacal riffs! And yet despite the fun nature of the album there is a level of misanthropy that oozes out in the belligerent ‘World of Piss’ whose bleak outlook on the world is summed up by the repeated ad nauseum howls of ‘We live in a world of piss!’. Don’t think that all Black Knife produce are break neck speed Blackened Punk anthems though, as slower tracks such as ‘Death Divine’ enter into the mix a far groovier element, still drenched in unending gore and offal from the lyrics but with a far more rhythmic feel to the leads and greater use of the ever present rumble of bass!

Simply put Black Knife are a ravenous bout of good time Black Metal with elements of Motorhead, The Misfits and Darkthrone all converging (Converge anyone?) into a mass of filthy spirit soaked carnage, hellish blood lust and vicious snarling vitriolic intent! In other words, I rather like this one! (Marksson)