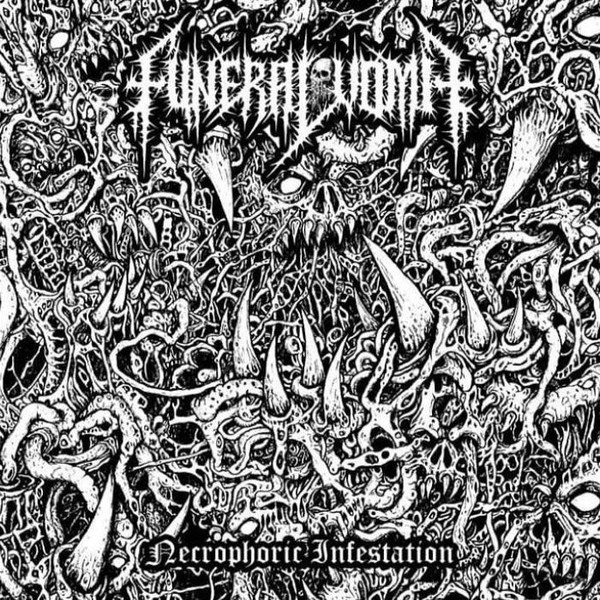 Only three times in my life have I vomited. First time WAS at a funeral, and I had to stand in a fucking church and listen to endless hours of bullshit from a man that probably is quite aware that there is no God, but he wanted to rant for four hours about how well HE knew the cunt. Sickening. It was hot in there, I felt like bloody Sauron was gazing at me, and I puked.

Second time was after a big night, like twenty cans in and other shit to go with it, I had to wake up in the morning and clean a heap of bloody Trout. I am a fisherman, have been cleaning fish my entire life. Bad day, hungover. The stench of fish overwhelmed me, and up came last night’s dinner.

Third time was when I saw a movie called “Titanic.” What does ANY of this have to do with this review? Well, a lot. I shall begin here. I’m all over the shop like a mad woman’s piss on this one. First track “Intro” is, of course a fucking intro, and it sounds cool enough, but then bring on track two “Execration” (meaning the act of cursing someone), and it does indeed sound like Willem Dafoe doing the first little sound bite about being the son of God or some shite, and then the drums kick in. Oh fuck me, is this a machine? This is as piss poor as when Ventor drummed on Kreators “Endless Pain” and everything they did up until “Extreme Aggression.” I thought it was a poorly programmed machine until I looked them up. Lars could even look at this after “St. Anger” and have a chuckle or three.

Bring on “Hematophagia.” and what the fuck just happened. The drummer is far more on point, although still not great, they sound like a different band. Am I going insane? Did he just pop out and have a Red Bull or three? Oh, and then the music gets complicated and you start to wince again. Bugger. This is messy, messier than a mad woman that can’t control her bladder to be precise as previously mentioned..

Onto track four “The Boiling Cauldrons of the Seventh Circle,” and after another soundbite from fuck knows what (and who cares what) movie – may be a Fulci one or something, we get treated to more absolute shite. Blat blat blat blat uuurgggh blat. I have to soldier on.. “Funeral Incantation (Corpore Insepulto)” has some really cool riff passages, but again, those drums make me want to peel my face off and bathe it in lemon juice.

For the title track “Necrophoric Infestation,” you guessed it, soundbite city, at the beginning AND the end. Necrophoric behaviour basically means that certain creatures (such as ants) will take all the corpses of the dead in their nest outside and make piles of their tiny little corpses, so an infestation of these bastards doesn’t sound so bad, they may even take out your trash and take your dog for a walk if you ask nicely. This music? Yeah, I like the idea of it, the riffs are cool and the vocals are sick, but maybe get some ants to remove that drum kit, or machine, or whatever it is making that infernal racket. Compared to the quality of demos coming out over the last few years, this one doesn’t stand a chance. Gone are the days of tape trading and stuff where ANYTHING that seemed underground or cool was taken as a must have. I’m really sorry to have to say all of the above, but I cannot in good conscience recommend you buy this.. (The Great Mack)