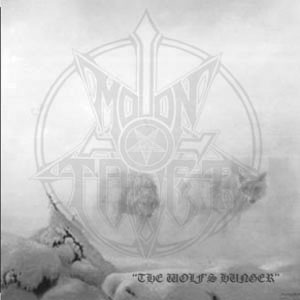 “The Wolf’s Hunger” is a brand new release brought to you by Aura Mystique Productions. This shows Moontower’ impressive demo – which was recorded in ’01 – formatted as a mini-album two years later. According to several resources this Satanic opus is also available as a cassette for a mere € 5,-. The MCD cost € 8. Lyrical themes are of course dealing with pagan wars and unleashing terror upon everything that breathes. Expect one hell of a Polish black metal act straight down in the vein.

The intro is quite similar to the one that Ragnarok uses on their “Nattferd”. As ‘The Darkest Funeral Ceremony’ kicks off, the music immediately can be described as raw and primitive black metal in the Polish tradition indeed. Though there’s a quite constant guidance by the keyboards, it’s not as if this is your average over-the-top melody instrument. Only a slight amount enters to emphasize the power chords. Still reviewing this particularly track, it includes different drumbeats; thus a wide variety in tempo to maintain the music interesting enough. This song is also fucking long (approximately ten minutes!). While ‘Black Metal Terror’ goes by, it becomes clear Moontower knows to compose the right atmosphere. A mixture of Nokturnal Mortum and old Dimmu Borgir is in order, but only when you roughen up the recordings and without so much melody both bands uses.

It’s a typical release from one of the Eastern lands. The tracks themselves are long and if you’re into this kind of music you won’t be disappointed, that’s for sure. “The Wolf’s Hunger” does travel in one style and if Moontower continues their path, we will surely hear from them again whilst a full-length. Black Metal Terror! (ManuelB)