Yoth Iria – As the Flame Withers 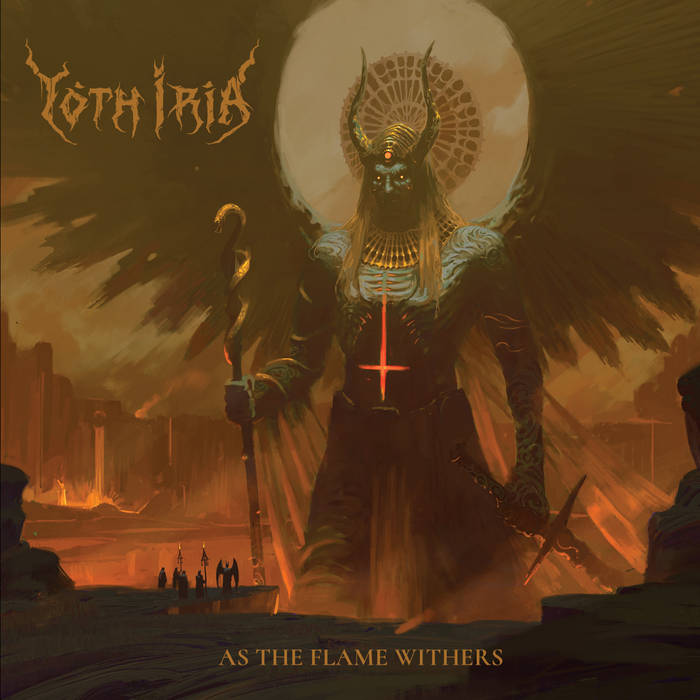 Though Yoth Iria introduced themselves with a great EP (released on 10” and 12” vinyl formats, as well as on CD and cassette) and a split 7” EP with fellow countrymen Kawir, this first full length marks their start on the Greek Black Metal scene. Though both masterminds, Jim Mutilator and The Magus, are far from new to the scene, as both of them were initiators of the early and infamous Hellenic scene from the early 90’s, being active and original members of Varathron, Rotting Christ, Thou Art Lord and Necromantia.

Despite the roots of both members are deeply rooted in the early black metal scene and have had their major impact on the development of the genre, more specifically on Greek Black Metal, the sound of Yoth Iria is not your typical Greek Black Metal band. Of course, resemblances to the aforementioned Greek bands can be heard, but the dark sound of Greek Black Metal, which has the typical slower chugging guitar sound intertwined with haunting and slightly mediteranean melodies and the dynamical drum patterns are not all that omnipresent.

Instead Yoth Iria has a sound more of its own, melodic and mostly midpaced and very well executed. Yet still rooted in the Hellenic sound. It lacks the aggressive attacks that Rotting Christ, for instance, is known for, but it does have that chugging sound. The midpaced drums gives space for all instruments to fully flourish and enhance the sound. This gives Yoth Iria a rather unique sound within the range of familiar ingredients.

It might not be legit nor necessary to compare Yoth Iria to either other Greek band, but it helps to put the band in some historical and musical perspective. The music on this full-length debut does speak for itself. The experience of both members (though Yoth Iria is now a full band with three more musicians) shines through and results in a very refined black metal record with a steady coherently quality over all tracks. This also results in lacking any real highlights, but that is hardly a problem as that also means that there is no pretendency, and, for a change, it is a relief to hear a band that is not trying to be as evil, obscure, fast or virtuoso, but just deliver the goods.

The album is released on all possible formats through Polish Pagan Records and I suggest to pick it up if you are into any of the Greek bands that helped forge the Hellenic sound, with Kawir being the band that comes closest, if you needed a comparison. It is great to have a quality band on the front to keep this particular scene alive and it is great to have Jim Mutilator back after way too many years of (relative) abscence.  (FelixS)