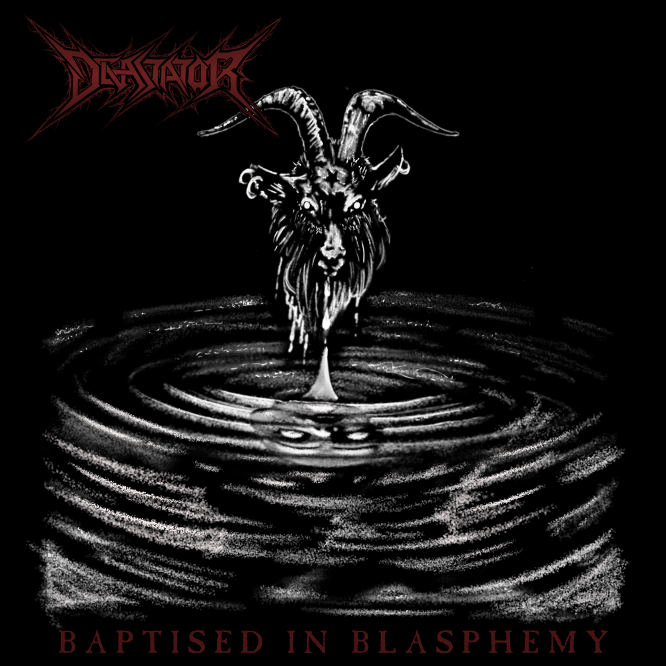 *WARNING* Here is a list of things in no particular order that you won’t find anywhere on the debut album of Devastator. Woke sensibilities, political correctness, daffodils, slow crushing doom metal, snowflakes or sensitivity. And now, in the interests of fair mindedness, here is a list of the things you definitely will find on Devastator’s debut album. Goats, blood, perverse anti-religious Black Thrash metal, blasphemy, unadulterated Venom and Motörhead worship, and a song about a right slag!

I’m reviewing ‘Baptised in Blasphemy’, the debut album of Derby’s Black/Thrash tyrants Devastator, not from a list of digital files as is usually the case in these instances, but from their LP which I was lucky enough to pick up having seen these boys destroy Newcastle last weekend, and the the difference it makes reviewing the music direct from an LP is wonderful.

Enough procrastination, onto the good stuff. Opening track ‘Howling Night’ sets the tone perfectly for twenty five minutes of pure carnage. Fast paced riffs, throat searing vocals, and a drumming display from the bowels of a pit! Throw in some good old fashioned guitar noodling wankery, a ravenous adrenaline fueled thirst for violence and destruction, as well as a track literally telling you to worship the goat or else, and another about a lass who, shall we say puts it about a bit, and you pretty much have everything you could possibly need in an album.

On a serious note, this is a really well put together album. From a production standpoint the right darkened tone is constant throughout, the musicianship is top notch and the songs are crafted superbly to maximize violence, fun and enjoyment. It’s a must own album from one of the UK’s best underground bands. get a copy of the LP from the mighty Clobber Records. (Luke Hayhurst)