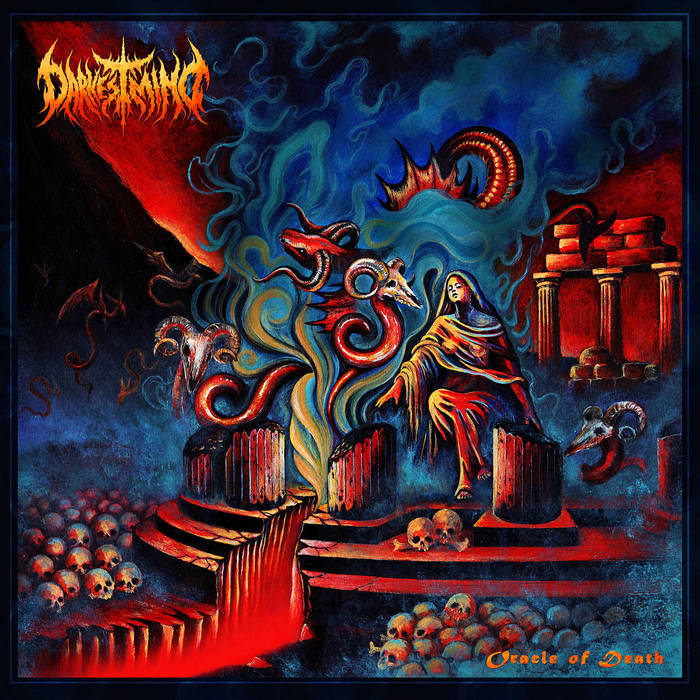 This Belgian Black Metal band consists out of three more or less seasoned musicians who also have had some experience in various other Belgian (Black) Metal bands such as Gotmoor, Theudo, Ars Venificium and Huldrefolk. Six years before this debut album Darkest Mind already had released an EP and gave Immortal Frost Productions enough confidence to release this debut album at the very ass-end of last year.

Looking at the official band photo, you cannot only already tell that the three musicians have a considerable taste, but it also predicts a little to where their musical path leads you. All three are wearing first-album-shirts from some interesting Swedish bands: Mörk Gryning, the criminally underrated Abyssos and Bathory. If you’d imagine the three of these albums blended together, you’ll come eerily close to the result that you’ll hear on ‘Oracle Of Death’. Maybe they should try to see if they can add Naglfar, Necrophobic and Dissection patches or so too, just to perfectly complete the picture. As the music presented is unadulterated Swedish Black Metal (from Belgium, though), complete with melodic riffs, epic leads, thundering drums and the sandpaper-like vocals – even the trademark acoustic ‘intermezzo’ is included (though at the end you’ll be treated with a bombastic riff). Of course, unoriginal as phuck, but it sounds just fine, so why should you complain? Well… along the way, while listening to this album, you could wonder whether it might be a little too Swedish or too unoriginal, as it tends to wear a little towards the end of the album. But the musicianship is fine and the production is clear enough, which both are mandatory with this sort of music. And it is fair to say that most bands doing this sort of music sound way more bland, Darkest Mind definitely figured out this Swedish trick and pulls it off just fine.

So, in the end it might be hard to not think of the bigger Swedish bands who laid down the blueprint for a whole new genre (it is impossible not to think of Dissection when listening to ‘Evoked By The Moon’) and it might come across as unoriginal, but it is executed pretty well. Fans of the more Melodic Black Metal can definitely indulge.