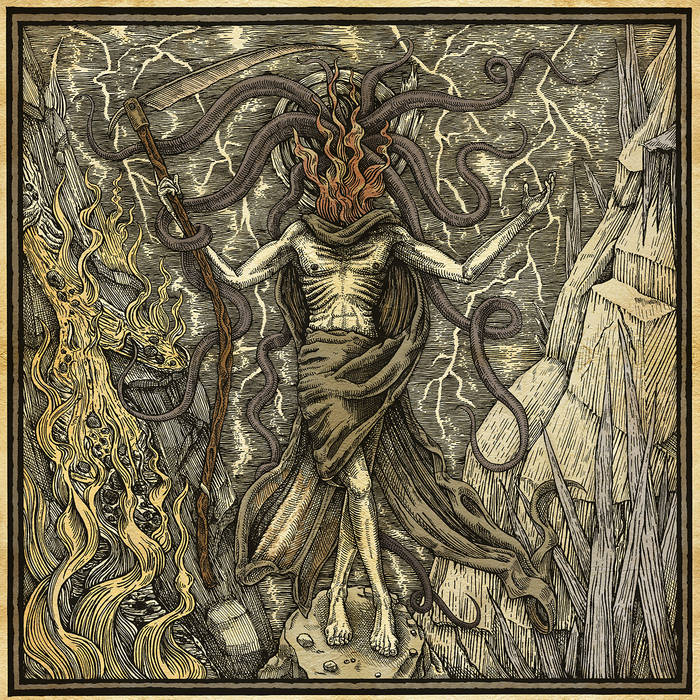 One of the longest running and active Black Metal acts from Portugal is Corpus Christii. Their almost quarter century in the Black Metal scene has taken them past many line-up changes, more than ten differences labels and an impressive discography. With ‘The Bitter End Of Old’, the band adds their ninth full-length album to their record.

A band with such a long history and a fairly hefty discography, besides the nine albums the band has also released a wide selection of (split) EP’s, it is only natural that musical shifts have taken place. Not to mention the line-up changes, in which Nocturnus Horrendous has remained the only constant. The earliest recordings were quite rough and slightly chaotic in nature. The band has been refining their sound over the many years to what it is today: a pretty modern-sounding Black Metal machine. The band knows how to use resources efficiently, twisting themselves into various corners to come at a result that sounds simultaneously modern and smooth, but also intriguing and complex. It is not given to many bands to forge those two worlds into a well-balanced whole.

Corpus Christii has delivered several good albums in the past, but somehow they never seem to stick very well. They always seemed to lack something, just that one elusive element that cannot be properly named. On ‘The Bitter End Of Cold’, all the pieces of the puzzle seem to fall together well: the above-average musicianship, the technical ingenuity, the catchy riffs and the strong sound. But the most important musical instrument is Nocturnus Horrendous’s vocal work. This is not necessarily the first time this has really stood out, but it is the first time that it has come out in such a convincing way. His ‘standard’ Black Metal vocals are strong, but he really gets next-level when he starts screaming, growling, bellowing, whispering, panting… Or when, as in ‘From Here To Nothing’, he deploys a passage of (semi) clean vocals. It’s of a Bathory-like epic, but sung well, much less off-tune than Quorthon, but rougher than Isole/Ereb Altor. Really great. And not only does it sound really good, but it immediately makes the song the best track of  the album and perhaps from their entire oeuvre.

That Corpus Christii is not a widely embraced band, I made peace with that years ago by now, but it still fascinates me. I have used the example many times over the past few months, but it is again very apt here. In a world where the great masses are chasing a band like Watain, which throws an objectionably boring piece of Black Metal on the market with its latest album and sells like hotcakes too, surely there must be much more room for a band like Corpus Chrstii.