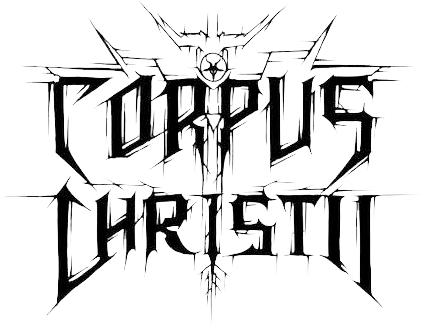 Corpus Christii is one of the most unusual bands in today’s black metal. Hailing from Portugal, they spread the black metal message, keeping the banner high for those truly devoted to the dark side. Ofcourse, we at Vampire Magazine give them an opportunity to let Corpus Christii tell their tale. Also, we ofcourse talked about the new album “The Fire God” and other releases that are coming up. (Stijn)

The songs on “The fire god” sound slightly less chaotic then the ones on “Saeculum domini”, in my opinion. Do you think this is due to the production or did you try to write more accessible songs?
It was all a question of progression,we didn’t sit and think what we should do, it just happened that way. When I recorded “Saeculum Domini” I was playing the guitar for only some months, so things could not be better, but I am damn pleased with that album,it has a very dark feeling into it. On the “The Fire God” album we made things more complex and harder to deal with. Some people think our first effort was harder to hear but I think itīs the other way around. We thought a lot of what we would do for the second album and it came out that way. It was a very natural process, we do not care what people may think about it, itīs just the way we want it,we are damn pleased. We always do different works, we never do something twice,so thatīs about it.

On the website of Hiberica, something is said about you being awarded the “most hated and worst Portuguese band of the year 2000”, so what’s the story behind this?
Yes,that is true,a big mag over here did some kind of votes regarding bands and “Metal people” voted us as the worst and most evil band in Portugal, the most hated, or something. I don’t really care, we do not stand in the standard Metal scene, we dont want anything to do with that. I couldn’t care less of what is happening in the “Metal world”. My fascination is towards Black Metal and its principles. Metal is just a form of music, nothing more. I am a big fan of old school bands like Iron Maiden and WASP etc. but that scene is long dead. I belong to the veterans, new scene only cares about gay shit like Moonspell and COF and fucking Nightwish, so everybody can just fuck off.

Friday, September 13th you will release “In league with black metal”, could you tell me more about it?
This album will be a tribute to Black Metal and all the true forms it can be represented in, more related to old school or modern approaches like Mysticum. We did a very varied work and it won’t be easy listening to it. Itīs an album for the ones who truly understand Black Metal and itīs Ideology. You will have to wait and see what is expected.

On “The fire god”, you covered the Mayhem classic “Buried by time and dust”. Why this particular song?
I consider it to be the most “Brutal” MayheM song ever, it fits very well within the Corpus Christii world. I could have also covered “Life Eternal”, but this song has much more to do with this particular band. I think we did a very interesing version of it, most people who have listened to it think we did a way better version than on the MayheM tribute released by Avantgarde rec. I won’t mention the band that did the cover though. (I will, it’s Keep of Kalessin; Stijn)

How did you get Necrobutcher to participate on that track?
I met him in Milano 1998,for the famous Milano concert they did, I became cool with him. I went to visit him in Norway and I invited him to do this session playing and he accepted the same minute I invited him, so it just happened. Besides this, he also played with us in one show, but only played the cover version of MayheM of course. It was a long time ago though.

It is also said you will release a 7″ on Drakkar Productions this year. What will be on that?
That EP should be already released, but we had some problems regarding the cover art work. It is not a very appropriate cover for Drakkar records but I don’t know. I don’t know yet if it will be the one we did or not, things have to be our way. I do not accept being manipulated by labels, but besides all this, I am big friend of them and nothing will go wrong. The plan is that it will be released in september limited to 500 copies. It will have two new songs recorded one year ago or so. Some people have told us that itīs the best tracks we’ve ever done so far, so I dont know, it will be a special EP for me. It will be called “Master Of …”, you will know why after seeing it.

What made you part ways with So Die and how did you get in touch with Hiberica?
So Die mother fuckers were rip off and didn’t understand shit about Black Metal, they treated us like shit and never answered our calls. I want them to fuck off, they are fucking sleezy mother fuckers. Hiberica is a true label dedicated to the true side of Extreme Metal, they are good friends of ours and they deserve the support. We will continue working with them, be it for albums or EPīs or whatever.

So far no concerts are planned. Is this a choice, and will Corpus Christii play live in the near future?
We are planning a small tour here in Portugal for september, for the release of “In League With Black Metal”. The 4 date tour will be with InThyFlesh and Flagellum Dei, good bands from over here, good friends of ours. It will be fucking intense to do this, cos we will for sure wreck the fucking posers in every single gig…..Be scared you assholes.

Are you planning on keeping the band a duo, or will you ever get more members in the band?
The band will continue as a duo for sure, we will have and already had the collaboration of different people like Guardião, Draconiis, Ainvar and Vulturius, but the main band itself will be a duo,I am the main composer and it will be like that. I already asked some people to do some riffs for future works and they have accepted of course. Corpus Christii is more than just a band, itīs a Family, a Union of Souls that fight for the true essence of Black metal and itīs Ideology.

The promo copy of my album didn’t contain any lyrics, could you tell us more about them?
The whole album is about the meaning about “Domination”, the whole concept around it, the ways and different ways Domination can be done, specially regarding Our Father. His ways on controlling our little and stupid little lives, he is the Supreme Ruler of all Forces that uphold our ways to extermination. In a way the lyrics seem to be really direct and with no second sense, but itīs wrong, all the lyrics have second sense into it, more spiritual and not so physical as they might “teach” one. but that is for me to truly know and for all of you to understand and reach it if there’s any interest.

I assume the lyrics for Lusitânia (de orgulho e honra) are in Portuguese. Do you think a ‘warmblooded’ language like Portuguese fits with icy black metal?
I think itīs curious you ask that, cos last week I was in Germany and France and it was way hotter than here and there everybody thinks itīs a “true” place to do Black Metal,so I really donīt care about lame comments like that, all I can say is that when Black metal is well done, it comes from the heart and soul, and not from the land you live in.

What is the essence of black metal according to you?
All that is Dark and Obscure in one’s soul, if one can transfer all that Darkness into the “music”, if it is being “well” done. Black Metal is not a form of music, itīs our Art, a Maniphesto towards humanity, a fuck off to what is real and what matters. There is no interest in reality, cos what is real, is what we despise the most. People live their lives to just try and get more money or whatever, we live to feel and feel the Wrath of the Horned One, we are the true sons of the Light, knowledge is upon us, only the Ones who truly understand, will “survive” and reach the end of the tunnel.

Anything else we can expect in the future?
Pure Darkness and Kaos.

Last words…
All Hail The Horned One!