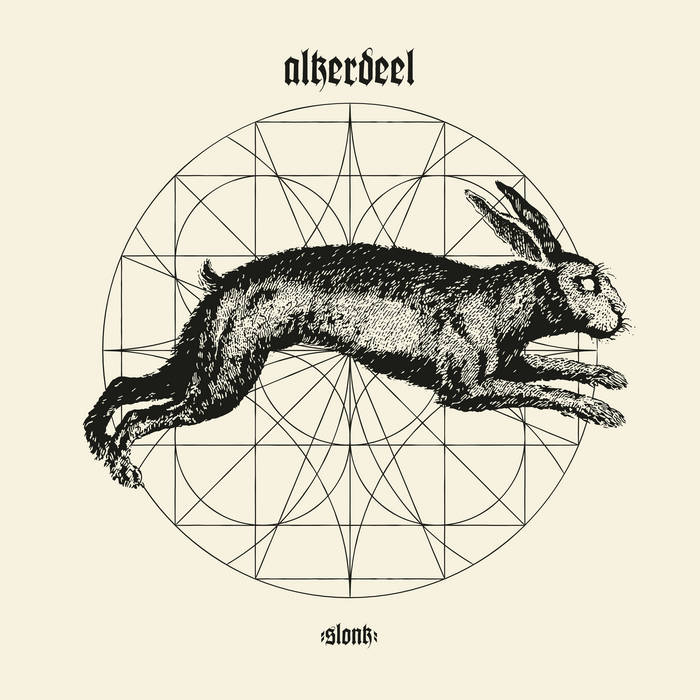 Belgian band Alkerdeel started life as a Raw Black Metal group with a heavy Sludge influence, but in recent years have shed the sludgier style to focus more on the Black Metal side, with a hint of Doom that is. Four track opus ‘Slonk’ is the bands fourth studio album and was released in 2021 on LP (Babylon Doom Cult Records) and also on CD. (Consouling Sounds)

Opening track ‘Vier’ spans over thirteen minutes and whose intro sounds like it could be an distorted reimagining of the Bladerunner soundtrack. Even as the riffs kick in it still carries that same dark, haunting ambiance and I’m also delighted by the continued presence of Doom Metal in the bands sound. Impressive are the bass tones which sound out prominently and add a great deal of groove to this album. In fact despite the brooding, grinding nature of the guitars, it is the constant rhythm of the bass that moves things forward, whilst sporadic abrasive vocal work and metronomic drumming complete the package. You’d be forgiven after a few minutes for thinking of this release as a darkened Doom Metal affair, but the raw vocal work and the raging bouts of blast beat fuelled surging Raw Black Metal put those misconceptions to bed.

As the album progresses the methodical façade built up by its earlier stages slowly crumble away as the raw and savage power of Alkerdeel’s style breaks through the veneer. What was once a slow and controlled sound is now a raging inferno of savage blast beats and delirium inducing vocal work, and the bass play that was so prominent is now competing with the maniacal gait of the guitar leads. From calm and precise to a maelstrom of bleak and meandering tones in just a few minutes.

‘Eirde’ is a complete contrast to the previous track. no long climactic build up, no Doom influence; just pure and unadulterated raw Black Metal savagery. That being said, it is nice to hear a Raw Black Metal band with good production, something I find incredibly rare. Third track ‘Zop’ is just an intenely barbaric but with a fast paced and extremely catchy groove to the drumming style and a simplistic but no less harrowing sound from the guitars, whilst the albums finale ‘Trok’ is the most violently intensive yet, meshing together deep and dark grooves with grinding, furious riffs.

What an album this is; brutally oppressive in mood, viciously heavy in sound, and each of the four tracks has a distinct sound.