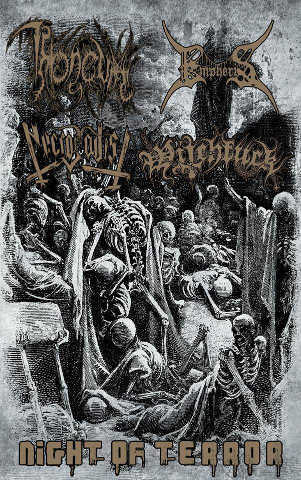 I usually don`t receive live releases so often, so I thought it would be interesting to write something about one of the most powerfull things about music, the live factor. There are records that are meant to be only on record, hardly possible to recreate the magick on stage. And some are born to be played live, as well as some genre/bands in my opinion are only as good as they are on stage. So here we got 4 Polish warships going for Black/Death/Thrash and more on stage and each band provides 2 songs. Since I am a Throneum fan this was a must for me, and yes, the record captures the raw brutality very well. Empheris continue were Throneum left with their “more simple” Black Thrash in the vein of Merciless for example. Necrosadist (not to be confused with some others with the same name) are doing a very 80s Black/Thrash (except for the blasts thrown in at higher speed here and there) with lots of breaks and tempo changes. Dug those tracks a lot as it is pure aggression. Witchfuck representing the last  band on the split, and sound more like old Sepultura and Sarcofago (yes, some Throneum similarities are here too). Some more punkish stuff the Venom/Motörhead way makes it a very straightforward powerful entity. Great closer. Recommended, not only for the die hards. (DPF)