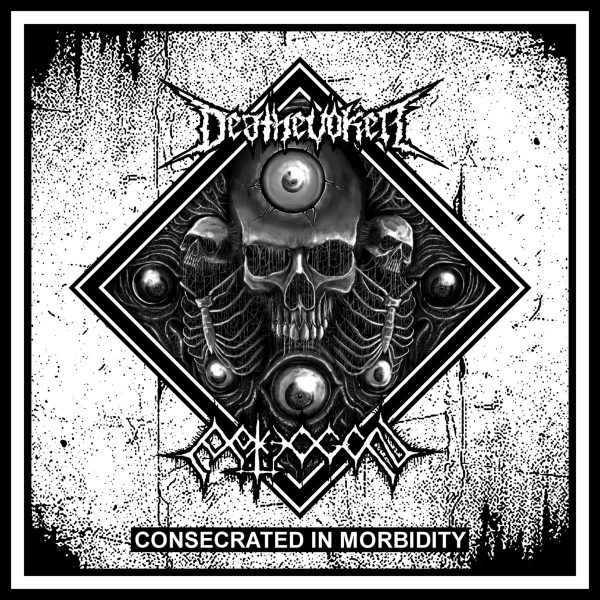 Raw, evil and morbid death metal in the uncanniest path of American and Swedish old school death metal has always been something very possessive and eventually inspirational for uncountable number of bands but when two Asian primordial beast from Philippines and Malaysia joined in force to create a split named “Consecrated in Morbidity” then it’s certainly worthy to dug deep and explore it’s sonic monstrosity. PATHOGEN from Philippines and DEATHEVOKER from Malaysia has produced a rotten slab of evil and brutal death metal split which was released on 2015 by Polish Old Temple records and very recently Diabolicurst Productions also released a cassette version of this split. PATHOGEN’s music on this split consists of four songs; two originals, one BATHORY cover (Blood and Soil) and a live song. PATHOGEN delivers the hellish mid tempo brutality in the vein of old Morbid Angel, Possessed and Dismember but with a exotic Asian approach of their own. “Mortuphagia” starts with a wicked intro which seems to be almost pre ritual before the initiation of a hideous journey. This track is a cold and voracious mid tempo assault aided by spine chilling guitar tremolo works, rumbling bass and deep buried drums work. “Dominion” started with more in evil thrash style and later turned into furious hostility; a track of very short length but they delivered with pure intensity. The ominous guitar solo burst here is purely chaos summoner. Then we have a magnificent Bathory cover with very harsh production but with the energy and fluidity to give it a more maddening vibe, which is truly a great nod to this classic. This side finally it ends up with “Sacrilegeous Profanation” , a live song which is horrendously raw sounding and have abyssal atmosphere; felt like crawling inside a cave of unearthly creatures. Abyss deep vocal, sickening guitar tone, everflowing bass and totally buried drums work make this live a pure damaging one. A truly profane end of some pure raw and evil death metal insanity. DEATHVOKER contributes here with four original songs and a SEPULTURA cover (‘Troops Of Doom’). The production is surely better than on the Pathogen part of the split, and they have a more Swedish Death Metal sound, in the ENTOMBED and DISMEMBER style. This is just harsh and morbid death metal, like a great nod to the spirit of legendary record “Indecent and Obscene” with total passion and excellent musicianship. Initiated with “Hateful Quest” which is a furious head bashing onslaught. It’s downbeat tempo and crushing buzz saw guitar tone provokes insanity ; like a nefarious journey inside a brazen and darkness infested territory which is a source of death and destruction. Then welcome to “The Silence…Death”; which is an offering the somber grandness of Death; like absorbed into the infinite darkness. A foreboding and ominous composition with some sanity devouring guitar work; also the lyrics of this song is a brilliant one. By this song DEATHVOKER evoked the true essence of death by inviting us towards the door of silence and nothingness. ” Fleshcraver” started with skin tearing and flesh revealing insanity; like in the night of the dead, flesh craving monsters rise from the grave and will eat you alive without mercy. Voracious growling of Gart is truly outstanding here, he drives the fleshcraving monsters those are in hunt of rotting flesh. The next offering, “Bottomless rivers of death” is purely an invitation unto the never ending stream of death and demise. It has rotten and obscene atmosphere which is surely something very strong ; cause you will be flowing endlessly into the bottomless rivers of death…for eternity. This side finally ends up with an raging and notorious ” Troops of Doom” cover from mighty SEPULTURA; they covered this classic with raising the true spirit of the Brazilian elder gods. ” Consecrated In Morbidity ” is an split of absolutely rotten and maliciously evil death metal. And the cover artwork by IRWAN (DEATHVOKER) perfectly encapsulate the sheer evilness and sanity devouring morbid spirit this split contains. This beastly split from the merciless Asian death hordes deserve attention from all the worshippers of raw, evil and morbid metal of death. Hails to the profane force of PATHOGEN and DEATHVOKER. (Rocky)