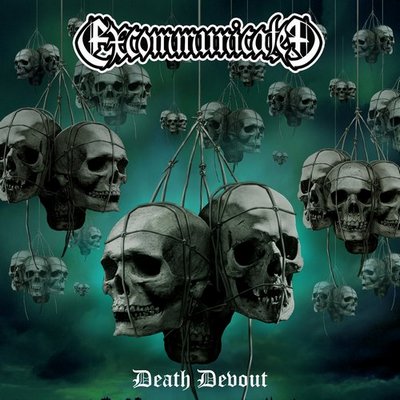 Not a lot of albums by a band are filled with covers only. Someetimes an EP or a re-release which features 2 or 3 bonus cover tracks, but Excommunicated decided to release a 16-cover tracks album, probably to honour their influences and tracks they like a lot. “They” are Excommunicated, a Death Metal band from the US that features members of Suture, Voracious Scourge, Fear Factory and Malignancy. Safe to say you’re dealing with an experienced bunch of fellas and it will probably not surprise you that this album is filled with lots of Old School Death Metal covers. You will hear Excommunicated version of Deicide’s “Lunatic of God’s Creation”, Obituary’s “Intoxicated”, Cemetary’s “Nightmare Lake”, Morgoth’s “Body Count” and Cannibal Corpse’s “Edible Autopsy”, just to name a few. So quite some first/second album tracks of Death Metal history, and I can only applaud such a collection. Ofcourse, every time you will probably think “the original is better”, but the covers are well played. (Ricardo)