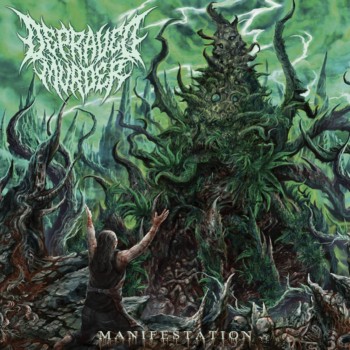 Indonesia, consisting of the world’s largest Muslim population, has fast become a hotbed for violent and brutal death metal. Rising up through the underground scene is newly-signed Comatose Records horde, Depraved Murder.

Its nine tracks are tight and slamming with a 29-minute album runtime. The riffs and song constructions are nothing out of the ordinary, mostly standard Death Metal fare. Although there’s not really enough dynamics or tempo shifts within each track, there’s nothing wrong with the band’s approach from a Death Metal standpoint.

The production sports a monstrous guitar tone that’s up front in mix, but the overall sound is a little too polished for this type of Death Metal and seems triggered or mechanical and not organic enough. Azam’s vocals are in the harsh, monotone guttural range, never changing tone, pitch or range. But of course this is brutal Death Metal we’re talking about, so they work really well for this type of music. If this type of pummeling Death Metal is what you’re after, then “Manifestation” serves its purpose well. (KaosSimms)