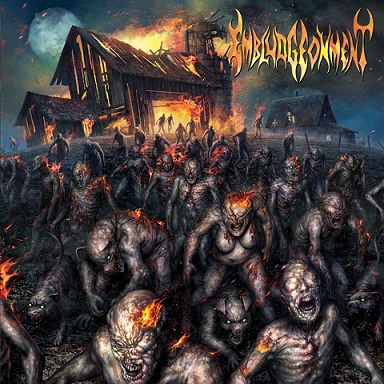 New Jersey’s Embludgeonment has been spewing its hate-filled brand of brutal death metal since its 2013 debut release, “Infinite Regress,” but has mostly flown under the radar within the genre. On its sophomore outing, “Barn Burner,” the foursome’s nine tracks of venomous vitriol pummels the listener like a derailed train heading straight for a school bus full of kids. Throughout its perfect 34-minute runtime, the band creates a straight-forward blend of Death/Slam/Thrash metal and Grindcore with raging brutality.

Opener “Transfixed Impalement” immediately unleashes relentless blastbeats, ferocious riffs and venomous vocals full of rage and aggression. Vocalist Ken England executes his juxtaposed gurgled growls/high-pitched shrieks with perfection. “Vociferation” is a good representation of what Embludgeonment does best by combining all things brutal; ripping riffs, chugging breakdowns, vicious screams, pinched harmonics, faster vocal pattern delivery, relentless blastbeats and a furiously-picked guitar solo. Tracks such as “Corpse Shed,” “Witch Cunt” and “Gruesome Mortification” all slay just as hard. However, the hidden gem of the album would have to be closer “In Consternation,” which is rather memorable and stands out the most of the nine tracks.

The production is clear, yet a little thin and not as full as it could be with the bass being pretty inaudible, which is unfortunately almost the norm when it comes to brutal Death Metal of this nature. However, throw in an awesome cover illustration by the fantastic Daemorph (DOA Magazine, Aborted Fetus, Pyrexia, The Black Dahlia Murder), and you have one brutal, top-notch, underground Death Metal release. (KaosSimms)