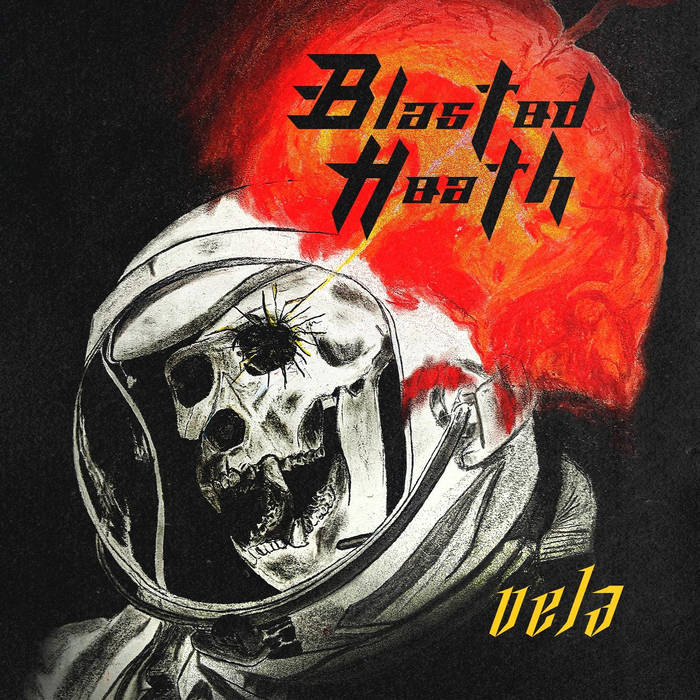 Whatever you expect when you hear the term Black/Thrash Metal, throw those concepts out of the window when it comes to Indianapolis quartet Blasted Heath. Their debut album ‘Vela’ (Released via Wise Blood Records on CD, Cassette and 12″ Vinyl, and mastered by the legendary Dan Swano) is an album of the year contender, and I’m more than happy to give you my reasons as to why you should surging towards your local record store for a copy like it’s Black Friday and widescreens are at 70% off!

What I certainly didn’t expect when I saw a Black/Thrash promo pop into my inbox was a deeply thought provoking concept album centred around outer space, the cosmos and the inherent horrors, fears and phobias that the great unknown can create in the hearts and minds of the populace. That isn’t to say that some of the usual Blackened Thrash tropes aren’t present in the work of Blasted Heath, as opening tracks ‘Big Chill’ and ‘Ape’ are rife with fast paced frenzied guitar and drum attacks, punishing bass play and echoing, raw vocal savagery. However, during the latter track the bands more progressive style begins to to take a firm grip on the album and as Blasted Heath move on through the groove laden, more rhythmic tones of ‘Europa’, the bands more expressive guitar leads weave a rich tapestry of sound whilst the buzzing, fuzzed out noise elements that creep into proceedings are at odds with the thrashier, more belligerent tones and yet compliment them superbly.

I’d say the true terror of outer space and it’s hidden mysteries really start to sink in during ‘Dark Energy’ as the melodies become more fearsome, the vocals just a bit more strained. However, it’s from ‘Neutron Star’ that this concept fully takes over, as harrowing guitar leads straight out of a classic horror soundtrack become the dominant force, and Blasted Heath create atmospherics using guitar tones, throbbing bass and a subtle drumming style that most bands couldn’t replicate with all of Emerson’s keyboards! As the album moves further into darker territory the intensity shifts exponentially, with short blasts of ravenous riff-age and furious beats blending sublimely with soaring melodies and grinding rhythms. ‘Wind of Vela’ is an instrumental track that uses audio samples that sound like they are from 1950’s horror movies, that really encapsulate the paranoia and fear that outer space can create within people, especially at a time when mankind was just beginning to want to explore beyond our planet.

Sadly, all good things must come to an end, but Blasted Heath save their most epic track until last. Again utilizing their strong sense of song writing craftsmanship, the band fuse slow, fuzz laden tones with faster, more belligerent Black/Thrash offerings. ‘Strange Matter’ sees the very best of the band, from dazzling solos, violent riffs and beats and plenty of the proggy wandering melodies I’ve come to love. I never expected an album as gripping, heavy, thought provoking or atmospheric as this, and now its over I want more Blasted Heath! (Marksson)