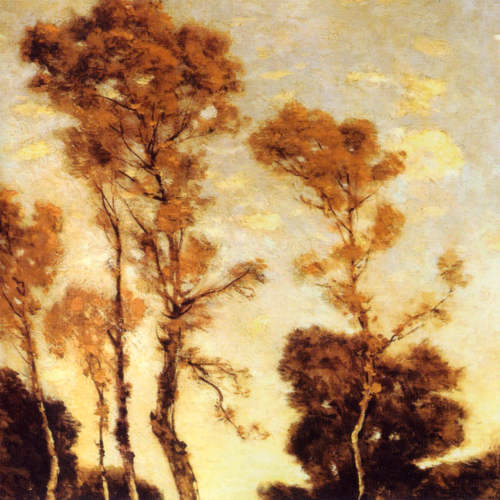 For me Drudkh was THE surprise of 2003. Only Windir released a better album. One and a half-week ago I heard a new Drudkh album was released. So I searched for about a half day on the Internet trying to find it. And I succeed, I ordered the tape version of the album by Faustian Distribution, a small, yet great extreme underground distro from Finland.

For all of you who don’t know this band; and I think that will be quite a lot people, let me introduce Drudkh to you. Drudkh is a melancholically/depressive black metal band, it’s a side-project of Hate Forest members. There are some resemblances between both bands but also many differences. To name a few: Both bands are playing quite raw black metal, yet overall Hate forest is much faster and Drudkh more mid-tempo orientated. Like lots of Hate Forest songs, all Drudkh songs do have a very long playing-time with long instrumental parts.

I already see some of you thinking: “Very long, mostly mid-tempo played songs with less vocals, that must be very boring.” When you think this, you’re absolutely wrong! Because all songs Drudkh ever released are fascinating, without even one exception, just the music of Drudkh you won’t find any boring song. All song structures are very exiting, mostly build around one or a few guitar riffs which form the main melody of that song; sometimes played with a few variations yet mostly hypnotizing and many of the songs even bring you in a kind of trance?

Like I told in the beginning of this review, I was very surprised by the last year released debut “Forgotten Legends”, everything on that album was correct, I couldn’t find even one misplaced note on that album. Same goes for “Autumn Aurora”, Drudkh did it again and released their second masterpiece in a quite short time. Actually there aren’t many differences between “Forgotten Legends” and “Autumn Aurora”. The most striking difference is the use of keyboards on the new album. Don’t expect any Dimmu Borgir-kind of keyboard using; Drudkh only uses the keyboard on the very background of the songs to intensify the melancholically atmosphere of the songs. Another element which is a little more present, are folkloric Slavonic influences. They aren’t present with traditional instruments or something like that, yet some guitar-riffs are inspired by the Slavonic Culture. For the rest, Drudkh only made their style more perfect.

I can’t really name one best song on “Autumn Aurora” because of the simple fact that all songs are brilliant. From the first sounds of “Summoning the Beast” till the last tunes of the last song “The First Snowfall” All I hear is pure melancholically depressive art from an outstanding level, Drudkh is absolute the best you can get in this genre!

The Album is only released on tape and quite hard to find, yet it’s absolutely worth searching. Supernal Music is going to release the album on CD at February 9th, So if you can’t find the tape version you have to wait for a few weeks and buy the CD. I?m for sure it won’t disappoint you. It’s almost impossible to create a better album than Drudkh?s “Autumn Aurora”. I’m almost for sure this will be the best album of 2004 for me. Hail the kings of the Slavonic Metal! (GeertVM)