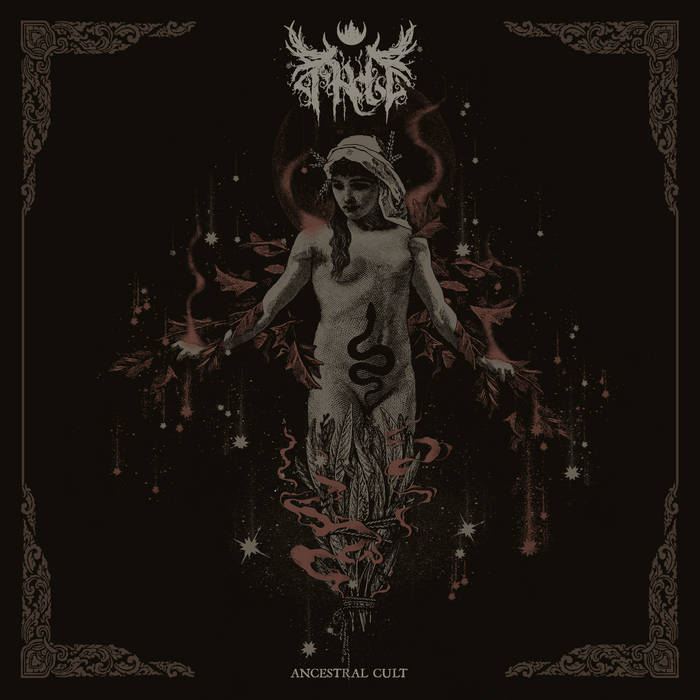 German Atmospheric Black Metal band Arde spent the Pandemic writing, learning, and creating. The fruits of this labour is ‘Ancestral Cult’, their second album to date. Released via the Darkwoods label as well as Wolves of Hades Records, this murky opus saw the dark of night at the latter end of 2021 and has been unleashed on both CD and cassette.

The term Atmospheric Black Metal can mean many things, and in the case of Arde it refers to disturbingly intense guitar rhythms, sweeping forth with volatile speed and casting a dark pall over the world as it does so. Opening track ‘The Birth Portal’ speaks of an interdimensional doorway leading away from this existence, before giving birth to us on another plain, and with that description it is clear that the Arde sound is matched by their lyrical output in terms of vehemence, magnitude and severity.

Up next Arde have us delving into Germanic folklore with the ‘Halls of Ostara’, the Goddess of Spring. In this equally ferocious and vigorous track, the band combine their harsh guitar tones, raucous vocal work and unrelenting drum tones, with thoroughly absorbing lyrics that whisk you away into the dense bleak forests of Germany to be confronted with ancient ancestors and revered deities. ‘Halls of Ostara’ is a powerfully written and performed track, and the grandiose backing melodies amplify its magnificent harmonics.

You may be in need of a palette cleanser after two intensive tracks of high quality Black Metal, and you get just that with ‘Sile’, a short folky track similar to Panopticon’s work on ‘Kentucky’, and with beautiful vocals by Amelia Baker from Cinder Well, who also composed the track.

from there the album enters its penultimate track entitled ‘Birch’ which dials up the extremity once more with another savage dose of fast paced aggression and wind swept bleak melodies. After that there is only the not so insignificant matter of ‘Vesica Piscis’ (In Latin this translates as Bladder of Fish) and its apocalyptic wanderings and this powerful and creative album draws to a close. If you want a lazy point of reference I would say Arde are very similar to Winterfylleth, though Arde’s sound is a touch darker and more claustrophobic sounding, and just like Winterfylleth, very much worth your time in listening to.