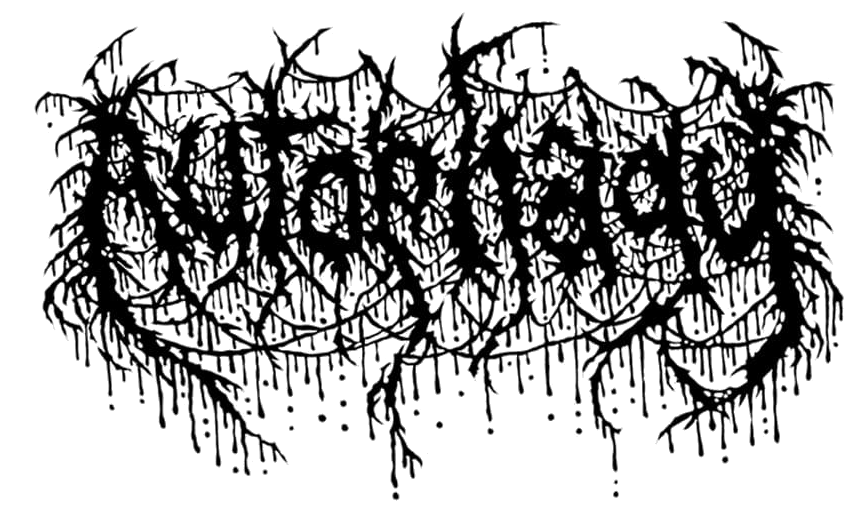 There is something self-devouring in Portland, Oregon (USA)…When you are releasing a demo filled with Old School Death Metal, straightforward as hell and in in the vein of Grave, Entombed, Benediction and Bolt Thrower, it is almost impossible to hide from us. Andy (vocals) will introduce Autophagy to all of us…(Ricardo)

Kevin and I played in a death/crust band a few years ago called Vastation. We’ve all known each other for years and just all wanted to play a more straight forward death metal band Kevin and Justin (Dispossessed,Dodge, ex Bastard Feast) had been writing some riffs for awhile and asked me if I would join on vocals. then Cole joined on drums and Adam (Bedlamite, ex Ritual Necromancy, Weregoat, Sempiternal Dusk, etc)  on bass. Cole has since parted with the band and we have a new drummer, Pat.

we have all always had a love for metal especially old school death metal. We try to not show any direct influence from any specific bands but sometimes thats unavoidable and our influences shine through. we try to blend Finnish bands like Abhorrence, Convulse, Purtenance, etc. With american bands like Rottrevore, Autopsy, Cannibal Corpse, ect. along with Swedish bands like Dismember, Grave, Interment. and UK bands like Bolt Thrower, Cancer ect. Each member of course has their own favorites and influences and by trying to combine them all to create our own sound. 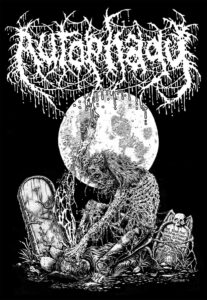 Well, your first demo was released in 2018 but Headsplit Records released the third version of it. Let’s talk about your one and only release…
Kevin and Justin write the riffs, I write the lyrics but we all come together to shape the songs. Everyone has input and we work together in the writing process. We recorded the demo here in Portland, OR with Charlie Koryn in his studio. Joel Grind did the mastering. I have done all the art for our Demo, Logo and shirts. Tried to keep it in the vein of classic death metal demos but give it our own style that reflects the lyrics and theme of the band.

I write the lyrics but everyone has input and suggestions. All the lyrics are about true crime and horror. Clive Barker, Thomas Ligotti and a few other authors have a large influence on what and how I write as do Serial Killers and the depths of human depravity. Also horror movies, lots and lots of horror movies haha. The gorier and more depraved/fucked up the better. I feel like vocals in death metal specifically are more another instrument than a message since they are pretty indiscernible and growled. However I try to keep them interesting and open to interpretation and somewhat poetic or deep for those who care to read them. I want to paint a picture so when people read them it creates a horror movie in your mind with the music providing the soundscape.

Like many you are embracing the cassette as format to spread your Old School Death Metal…
Growing up in the 90s cassettes where a huge part of the music scene they were easy to make copies, trade with your friends and fairly cheap. We wanted to keep that alive. We try to keep up with the times, the demo is on youtube and spotify and digital download. We don’t have any plans to release it on cd or vinyl but thats not to say it won’t happen in the future. We are currently writing our full length that will be put out on Pulverised Records sometime in 2020 that will be on vinyl, and CD through them and Cassette through Headsplit Records.

Aaah, yes…Headsplit Records…
We’ve known Dylan for quite a long time, I approached him and asked if he would be interested and he was just as excited to work with us as we are with him. Headsplit is a great label and have been super supportive and awesome to work with and we made sure that when we signed with Pulverised we would still be able to work with Headsplit and release the full length through them as well. 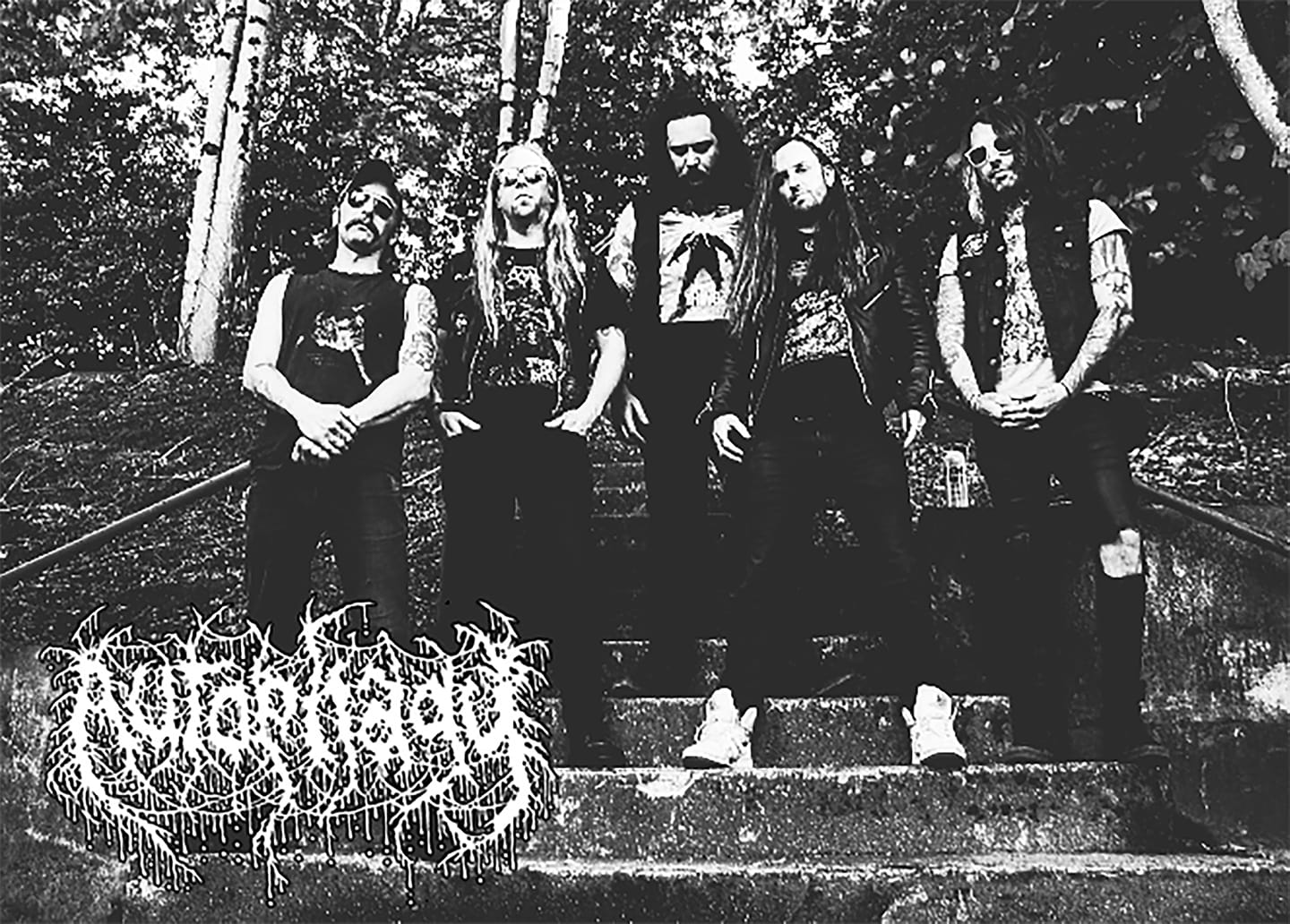 Enough about the present and the past for now, what about the future of Autophagy?
We have about 90% of the full length written however its taking longer than we anticipated as we are teaching them to our new drummer, Pat (Drouth) and subsequently the sound has changed with the new style of drums and we have all adjusted accordingly. also dropped the HM2 pedals. but that’s all I’ll say. you’ll have to wait for the LP to hear it haha.

Our expectations are just to have fun, we enjoy what we are doing and want to keep it that way. That being said we are all really excited to get this album into the hands of you maniacs out there. We also are very excited to be a part of Total Death Over Mexico in the spring of 2020 and also Covenant Fest in Canada later in the year. We have some other shows lined up here and there but mostly in the Portland/ Seattle area. We are focused mainly on making this LP the best we can.

Any other bands or albums you’re enjoying lately? And what about your local scene?
The Pacific Northwest and west coast in general are a hotbed for amazing bands right now. We are lucky we get to share the stage with bands like Witchvomit, Fetid, Cerebral Rot, Torture Rack, Mortiferum and many more in the area. Also bands like Mortuous, Ensepulcher, Acephalix, Necrot, Vastum, Scolex…. really just too many to mention here. Its a great time for Death Metal.

I think we covered everything. Thanks for introducing Autophagy!
Just thanks for this opportunity and interest in us! Come support us and all the other great bands at the aforementioned fests, labels like Headsplit and Pulverised Records and just underground bands in general! Go to shows, buy records, start bands, buy zines! Cheers! sorry to anyone I forgot to mention!