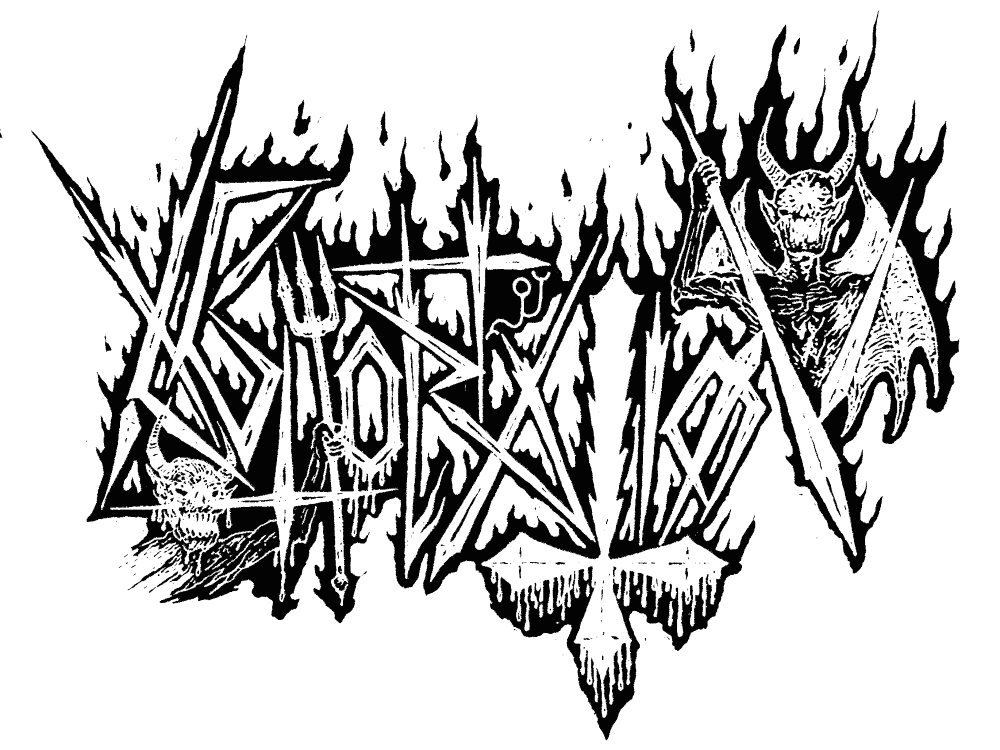 “It is all about the riffs”…Abhorration released their first effort through quality label Invictus Productions recently, and the EP is definitely something to check out if you’re into Death Metal in the vein of early Morbid Angel, Sadistic Intent, Vader’s “Morbid Reich” and Merciless. And I bet you all are…Magnus (vocals & guitars) answered all my questions and resulted in some unexpected answers, like the one on Bolt Thrower, but shall we start at the beginning? (Ricardo)

When I moved back from Australia in April 2020 it was clear that my current band, Hecatomb, would be placed on some sort of hold for a while, as the guitarist remains in Melbourne. I’ve played in bands since the age of 10, so it was obvious to me that I would have to start something new, and I wasn’t really interested in reforming any former bands. Øyvind and I had played together in Condor, as well as live with the band Mabuse, so I contacted him soon after arriving back, with the idea of playing some old thrashing death metal. I had been obsessing over early Morbid Angel and Sadistic Intent for a few years, and so the style was set, and the riffs flowed quite naturally.

Both Øyvind and I had played with Andreas before, in Mabuse, and him and I had been working together on recording and mixing parts of the Hecatomb demo, Horrid Invocations earlier in the year. He joined in bass around December 2020 and we finished up the four songs for the EP during the spring of 2021. The recording process started the in May/June.

We all also knew Arild from earlier, and after he saw us play at a private festival last summer he expressed interest in joining, and did just that after he finished up mixing the EP in September 2021.

What inspired you to start a band in this style?

A big appeal to me is the variety of tempo, rhythm and intensity. I don’t think there is any genre more dynamic than Death Metal. This makes it a lot of fun to play, and obviously more interesting to listen to! I have also always had a preference towards the thrashier parts of extreme metal, and so the older death metal, before the style was completely defined has always been my favourite within the genre. The style itself has everything that I like about metal: aggressiveness, evil, brutality, and yet allows for a bit of technicality.

Playing this style also felt like a natural progression for me. Having played in more primitive-sounding bands earlier, I didn’t just want to do the same old thing. I also had a pretty clear idea of what I wanted the band to sound like: I wanted it to sound dark, funerary, sinister and of course angry. I wanted it to sound sort of intrusive and in-your-face, if that makes sense.

The main influences for Abhorration are obsviously Morbid Angel and Sadistic Intent, but also bands like Possessed, demo-era Nocturnus and Vader, Nifelheim, Repulsion +++. I was also really inspired by the second Deathwards demo that was released by Invictus in 2019. This demo is a perfect piece of modern old death metal. For the vocals my main source of inspiration was probably Apollyon and Aura Noir, as well as Paul Speckman and Wagner Antichrist. There are definitely also parts of the music that has been influnced by other genres and styles, though I can’t point to anything in particular.

Before we start on your own music, in your opinion which release or releases absolutely defines the genre you’re playing? Is it Autopsy’s “Severed Survial”, Death’s “Scream Bloody Gore”, Possessed’s “Seven Churches”, the Morbid Angel demos or maybe something else?

All the ones you mention + Death Strike – Fuckin Death, War Master, INRI!!!, Vaders Morbid Reich, Sadistic Intents Resurrection, Merciless – the Awakening and obviously Altars of Madness. Basically most death metal pre- 1993 or so. 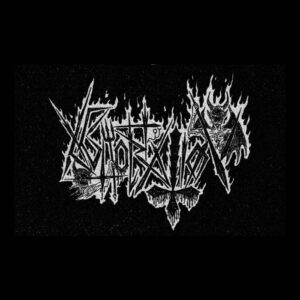 Lets talk about the EP, “After Winter Comes War”…

The writing process for this release was pretty straight forward. I had a shitload of  unused riffs, which along with additional parts along the way gradually built up the songs you can now hear on After Winter Comes War. I wrote all the music and lyrics for this release, but that has already changed going forward. As the band in a sense was my idea and “vision”, I had a pretty clear idea on what I wanted it to sound like, and so it was natural for me to write the music to start with.

The actual recording of the EP was done by Andreas in his rehearsal space/studio, and Arild added a guest lead when he mixed it. We recorded as we always do: drums first, while a dummy guitar track, then overdub both guitars, bass and finally the vocals. No click tracks, and no triggers.

The logo on the cover was made by RK Valbo of Obliteration, who did a great job as always. I sent him a bunch of logos we all liked, and this was his first draft. Couldn’t be happier!

I write all of the lyrics, which to me makes sense since I am also the singer. I like to fit all the words with the riffs, and so it would feel strange for someone else to write them, and plan out the structures for me. All the songs are inspired by The Divine Comedy, and I had an idea that I wanted the EP to be about Lucifers ascension up through the nine circles, to wage war upon mankind. This idea died out, so in the end each song basically covers one or more of the circles of hell. The title track is about Lucifer being frozen stuck in the ninth circle, breaking free and rupturing through to the circle of Fraud. Ten Trenches of Malebolge is obviously about the Malebolge (the eight), Desecrate the Exploits of God is about the seventh (violence), and the title was inspired by the forest of suicides, where those who committed suicide are punished for desecrating Gods biggest achievement. The last song is about the fourth to the sixth circle: the storm of putrefaction, the Styx, the entrance to Dis, and those punished for Heresy.

I have never put much effort into lyrics up until now, so to me the lyrics on this release is an important part of it, though I realize it probably isn’t to anyone else.

How did you get in contact with your label Invictus Productions?

I had worked with Darragh earlier on the vinyl and cd-release of the Hecatomb demo ‘Horrid Invocations’, and so I asked if he would be interested in releasing our new band as well. Once we had recorded and mixed the EP I sent it over, and he helped us sort everything out. A really good label to work with, so we’ll definitely keep working with them in the future.

Within your discography you have both cassette and vinyl as formats as well. Is that important to you? What do both formats mean to you, as a recording artist but also as a collector?

Well, After Winter Comes War has only been released on tape so far, but the vinyl is hopefully coming next year along with a full-length album. I personally buy both formats, and prefer them over any other, with vinyl being my favourite. I would have no interest in releasing music if not on a physical format.

What are your expectations for Abhorration in the future? Have you already written any new songs?
We’ve finished one song since the recording of the EP. It has been slow as we obviously got a new band-member, and have spent most of our time preparing for shows. We were gping to play what wouk dhave been the release gig for the EP on December, but due to covid-restrictions it was cancelled just two days before the show. The new song is more intense that anything we’ve made before, though I am really keen to keep the songs varied, with many tempo changes and so on. I’ve played in bands that quickly stagnated before, and I really don’t want this to happen with Abhorration. We will not get stuck in a rut, and anything that sounds good goes.

Some of you are involved with acts like Hecatomb,  Nekromantheon, Obliteration to name a few. Any news on them to tell our readers?
I personally play in no other active bands at the moment, so not for me. I cant really speak for the other guys, but things are brewing. Andreas’ other band, AVMAKT, released their debut demo in December. Total anti-trend black metal of the primitive sort. For anyone into mid-era Darkthrone.

Are you guys involved in any other way in the music scene?
Both Arild and Andreas have studios where they record and mix music. Arild is probably best known for having recorded and mixed releases for his own bands Nekromantheon and Obliteration, but also for mixing albums for bands like Deathhammer, Evoke, Black Viper ++. Andreas have also recorded and mixed quite a few releases from the Norwegian metal scene.

Are there any bands or albums of your recent playlist you would like to mention? A rediscovery, an overlooked gem or an unsigned demo band that deserves attention?
My biggest realization of the past year is actually Bolt Thrower believe it or not. I have known “In Battle…” for years, but for some reason I never checked out anything further. Until early 2021! And boy was a blown away. Other releases I have enjoyed lately are the second demo from Chiles Deathwards, “The burning church” by Lucifers Hammer, Sijjin – Angel of the Eastern Gate, the first Mortuary Drape and also Penis Metal (I know…) by Hades Archer.

There has actually been some pretty good new bands from Norway in the past few years, notably Dødskvad and their two demos, Desolation Realm, Sovereign and the Avmakt demo mentioned earlier. The first three all represent the new wave of Norwegian death metal.

Also do you have favourite labels you always keep an eye on when they announce a new release? Or a favourite illustrator / cover artist?
I don’t really pay too much attention to which labels release what, but I guess some of my favourites are also the biggest in the underground: NWN, HHR, Invictus, Iron Pegasus, High Roller and so on. Blood Harvest is also good, and I really the labels I HATE and PLAGUE ISLAND from Sweden. In Norway we have UNBORN PRODUCTIONS Prods and DUPLICATE. My fave record shop is obviously KATAKOMBEN in Oslo. TOTAL SUPPORT!!!

Some artists I like are Wayne Barlowe (not that he’s done any cover art as far as I know), ROK, Paolo Girardi and Roger Dean. Roger Dean was probably the first graphic artist I actually got into. I love YES, and I think it was when I saw the gatefold version of Yessongs that I realized how amazing his work is.

Thanks for your time!
Keep supporting real metal. NO COMPROMISE!!