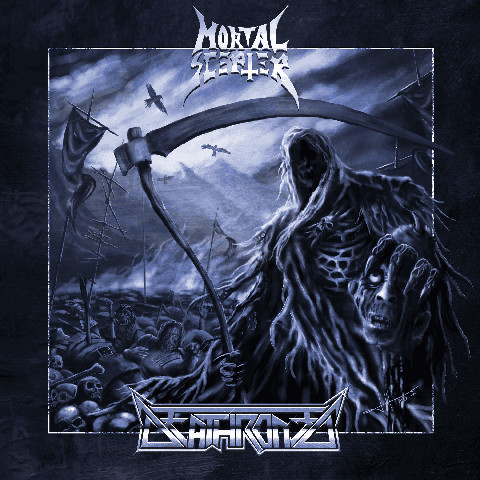 Besides their new full length, Mortal Scepter also released a new split album with Deathroned last year. As we’ve excepted, it turned out to be raw and unpolished European Thrash Metal and there’s hints of Black and Death metal in it as well. I said “European Thrash” because these kind of bands usually take influence from the big German names of the 80’s.

Something worth noticing, the bass guitar riffs are very well done and more prominent than on the full length. The distortion and reverb are heavily present, and in some parts the instruments sound purposely desynchronized. This is used to create a grim and authentic feeling of oldschool metal.

Comparing both bands, Deathroned plays in more or less the same style as Mortal Scepter. However, Deathroned has lower tuned/heavier sounding instruments, while the vocals are more reminiscent of traditional Heavy Metal, and some of the earliest Thrash records. There are elements from founding Thrash albums such as Slayer’s “Show No Mercy” and elements that remind me of recent bands such as Deathhammer. Both bands have an interesting mix of metal-genres/influences, without sounding like copycats. Because this is something these kind of bands often get discredited for. The changes in rhythm are well done, and it sounds like they are not really trying. This makes the album sound more natural. There is however, not a lot of structure and progress to this album. Every positive trait comes with a downside and it’s mostly a matter of choices and compromises.

Mortal Scepter also added a cover of Death; “Left to Die”. It sounds like a cover should sound, respective to the original but with the bands own twist to it. It’s not too different from the original, since bands like this are a throwback to a time where there was a much finer line between the different genres of extreme metal. The solo’s on the last track are surprisingly good though, both the lead guitar and bass guitar. It’s not Deathroned’s own song though, it’s a cover of Violent Force; “Sign of Evil”. But with this, the band has proven to be capable of a more technical form of playing compared to their own songs. (Jelmer)