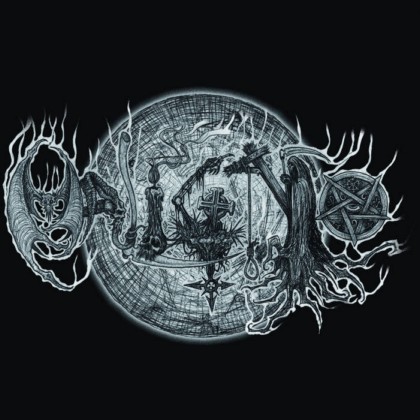 If you take some fine ancestral echoes from a Paraguayan demonic abyss and mix them with Southern European vibrating graves resuscitation & grimoires spells recitation…and top that off with the bloody Mediterranean black masses predikator to raise some nekromantik spirals of agonized terror, you will summon the dark spirit of Maligno. From Germany ofcourse, but you already knew that by the intro. Started to create their Devilish Metal back in 2015 and sacrificed their first virgin with their “First Demo-nic Manifestation” demo in the same year. Headbangers Records from The Netherlands picked them up and was interested to release their debut album. The unholy alliance within Maligno had a virgin to spare for the next sacrifice and here you go…the self-titled debut.

Let me tell you this in advance, if you are a fan of  polished productions you better stay away from this one. This could be easily a “guys, we only have money for to rent this studio for 40 minutes” kind of thing, or Desekrator 2.0….”Meeetaaal for Demooonsssss!”. Like it is recorded in one take. It sounds enthusiastic but sloppy and sometimes the vocalist has to gasp for air (no Autopsy pun intended here!) as he can’t cope up with the speed. Still, the mid-80s Blackened Thrash has something charming which raises more sympathy than it repels. Also, the reverb on the vocals which reminds me of ancient Sepultura is a good decision as well in my book. With the Sabbat (the Japanese one) cover “Satan Bless You” on this album, you will get one of the influences of Maligno. I would like to add derailed acts like Abigail, Vulcano, Midnight and Nifelheim to give you an inside of their exquisite taste.

I will not lie to you, this is not an outburst of fine musicianship or outstanding quality but I do have a high level of sympathy for this kind of Ancient Extreme Metal. And let’s be honest to each other…you still sing along with Venom’s “At War With Satan” as well… (Ricardo)