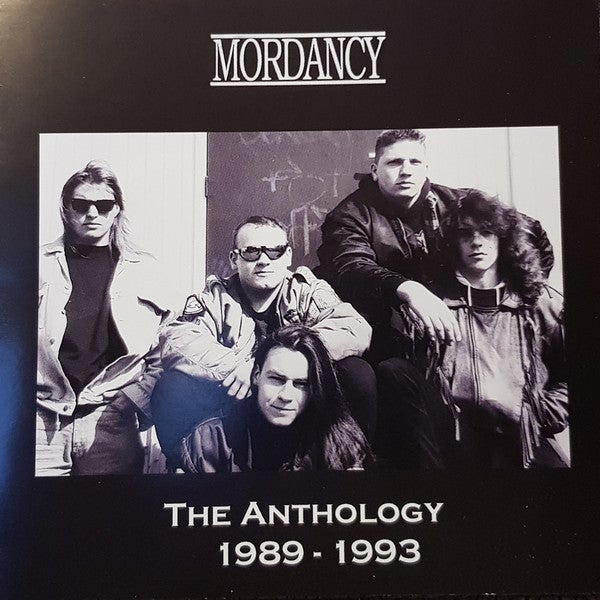 It is not unusual…no, I’m not going to quote Tom Jones….it is not unusual…no, I’m not doing the Carlton-dance…it is not unusual that known acts are releasing old material as bonus material when they or a label re-release an album or combine several demos and rehearsals and release it as a “new” release. Besides those known acts, there are acts who didn’t make it in the 1980s and early 1990s. Lost interest in the music they played, differences between the band members, moving of band members as this was before the sending-files-era or a lot of other reasons made sure a band split-up. But there is always someone who thinks “that was a good band or demo who everybody has forgotten…or maybe even heard of”. This is the case with Mordancy from The Netherlands, consisting of ex-members of Burial, Mindlink and Bullcreek, and Headbangers Records.

Mordancy released a demo called “Mortals Slow Decline” in 1992 and a 7” EP, “The Progressive Downfall” which was released by Shiver Records in 1993 and shared a stage or two with known and unknown acts. On this compilation you will hear the demo, 2 live tracks (of which one is a Prong medley) of a gig in 1991 and a rehearsal of 1993. The kind of Metal you will hear is Death/Thrash with a progressive twist (definitely the bass, just hear the string plucking during “Macabre Justice”, during the demo it also gives me a Testament “Souls of Black” vibe) and a typical early 1990s unsigned sound and approach. A sound and approach you either despise or embrace. The first probably of the lack of professionalism when you compare it with nowadays recordings, the latter because of nostalgia. I for one, embrace it, enjoy the trip down memory lane but mostly doesn’t grab it again soon after.

As said Mordancy plays a progressive kind of Death/Thrash but does have a Doom/Death vibe going on during the mid-tempo parts on the demo. If I have to give you a direction, and I love doing this, it would be a tad slower Polluted Inheritance with hints of Callenish Circle’s “Lovelorn” demo (the Death/Doom parts) and Creepmime’s “Shadows”, to keep it in the Dutch scene. I wasn’t familiar with the demo as I didn’t collect it during my tape-trading days, but this was an enjoyable listen. (Ricardo)