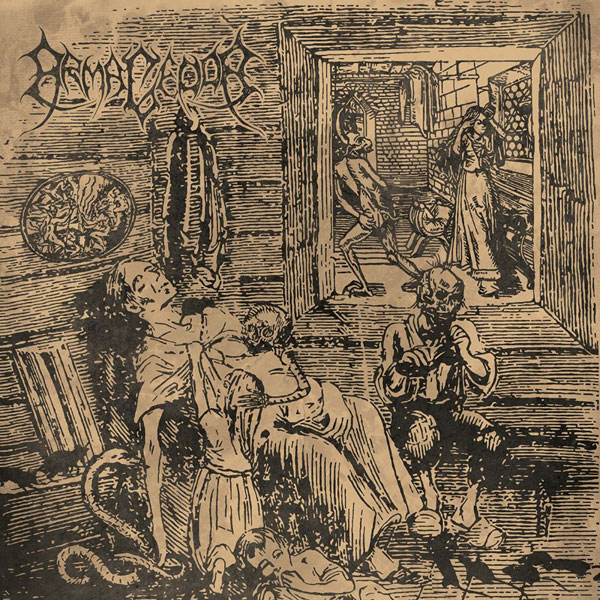 Sweden’s Armagedda were a shining beacon of the black metal scene back at the turn of the century, their first two albums a raw blend of both the Norwegian and Swedish sounds that wowed both critics and fans (especially the furious “Only True Believers” from 2003). On their third opus, 2004’s “Ond Spiritism: Djæfvvlens Skalder Anno Serpenti MMIV”, they progressed in leaps and bounds to produce a more mature, focused, and visceral record that, although dividing their fan base, was an unmitigated triumph. With lyrics completely in Swedish for the first time, it contained a wealth of atmosphere and varied pacing that would prove hugely inspirational for black metal artists to come. And then unexpectedly, after releasing another EP in that same year, the news of their split came as quite the shock, especially considering what they had just created.

A two-man project, Armagedda is A. Petterson on guitars/bass and Graav on guitars/vocals who utilise guest drummers to fill out the line-up. Since the dissolution of the band, both members have kept busy in other projects, but what no-one outside the inner circle was aware of is that they have continued to write and play behind closed doors over the past 16 years, ultimately announcing earlier this year that Armagedda was indeed still alive and that they had completed a new album to unleash upon the world in this, the dreaded 2020 (never a more fitting time for apocalyptic Black Metal).

The bigger surprise is that the writing for “Svindeldjup Ättestup” started way back in 2003, a full year before the release of “Ond Spiritism”, so the evolution of this music is just shy of 20 years in the making. It certainly has thematic ties to its predecessor, with artwork drawn from the same well (again by Erik of Watain fame) and even containing a song called “Ond Spiritism”, but the sound and production (courtesy of MZ of Mgła fame) are cleaner and more streamlined than ever before, yet retaining the grim rawness that the band are known for. Ultimately, this works in their favour, as it is a further progression for a group considered dead and buried.

The drums are handled by The Fall this time, a Polish skin-master that doesn’t overplay or bury himself under waves of blastbeats, but chooses skilful fills and grooves to bring the music to life. Even though there are fast passages, the overall mood is created by weaving mid-paced passages that are made that much more evil by the vile, venomous vocals of Graav, a man that can summon amazingly demonic sounds with his throat. And the guitars are likewise thrust upon our ears with varying degrees of attack, from eerie melodies and haunting corridors to all-out furious tremolo goodness. With the final component of a monstrous bottom-end from the bass of Mr. Petterson, the instruments and stars combine to make for apocalyptic music.

With the obligatory Black Metal ambient intro out of the way (it does, thankfully, set the mood perfectly), we are left with six songs of indulgent length that have plenty of room to both invoke and exorcise the Armagedda demons. But it is album-closer “Evigheten I En Obrytbar Cirkel” that proves to be the most meaty of the dishes. At just over 11 minutes, it eases in through mid-paced riffs and twisting guitar melodies and adds element after element that build up to a mighty epic climax. The clean mid-section is a palette-cleanser that leaves the listener unprotected for the final onslaught of distorted Black Metal arsenal, and it leaves one breathless by the time the synths die out.

Whether or not Armagedda will continue or even have anything more to say after this is immaterial – “Svindeldjup Ättestup” is a crowning achievement for a band that has given its all to create four albums of absolute Black Metal mastery, and utilising most of the building blocks from the genre. 17 years in the making, and damn if it wasn’t worth the wait. Essential. (JohnM)