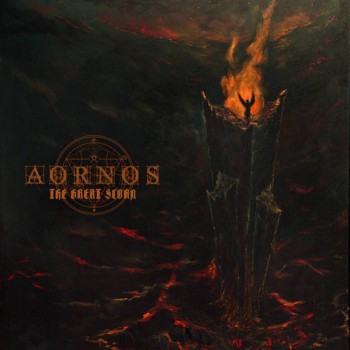 It seems Algras, the multi-instrumentalist behind one-man Hungarian band Aornos, has lots of inspiration to create new music, as this is the 4th full-length in 4 years and within those years he also released an EP and a split with De Profundis, a melodic Black Metal band from the same country.

With the co-production of 4 different labels, “The Great Scorn” became a Black Metal album that has a symphonic, atmospheric as well as a dissonant approach when it comes to songwriting. When you have parts of Emperor, Mayhem after 2000-era combined with an Atilla Csihar like vocal style, Satyricon and 1349’s “Hellfire” in your music, it is without any doubt the Black Metal has variation in speed and atmosphere. Although the Cosmos-themed “The Great Scorn” is well played and you should give it a try if you’re enjoying the acts I mentioned, I do think it will be difficult to stand out in the pile of many releases nowadays. (Ricardo)