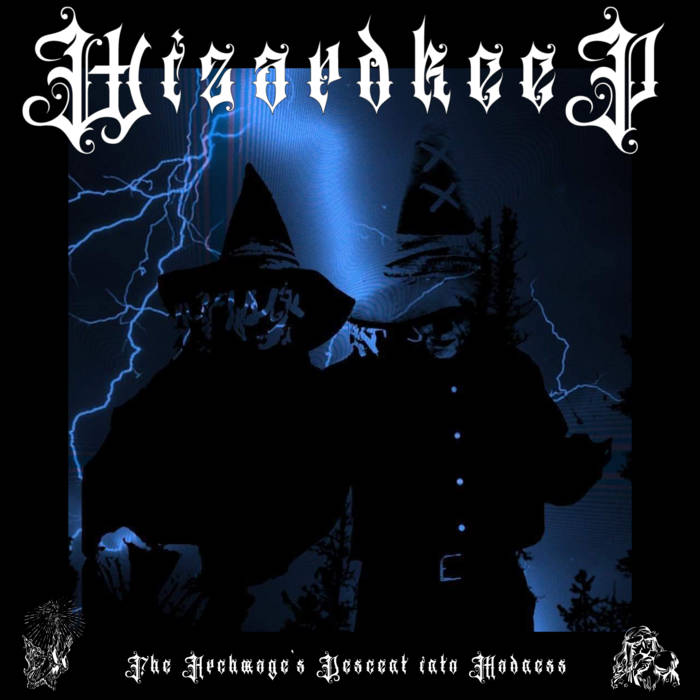 Not too long ago I reviewed an album by a band named Daedric Armour and I had no idea what the band name actually meant, so I turned to my good friend Google. It taught me that the band name was taken from a videogame named Elder Scrolls. I was actually rather flabbergasted that videogames are seemingly inspiring to some musician. I also reviewed (a fantastic!) demo by Aargøn, which was inspired by that same videogame. And while researching this new two-piece Black Metal act, I learned that Snitz, also known as Arian Mauk, also has a band named Daedric Chamber. I am still clueless on what ‘Daedric’ is, but, being the mathematician that I am, I was able to quickly able to connect the dots: that was also Elder Scrolls inspired. And while listening to Wizardkeep things started to make even more sense.

Wizardkeep must be one of the most original Black Metal bands that I have heard in some time. The core business of these youngsters is pretty wild Symphonic Black Metal, much in the same style as later Morgul for instance. But while Morgul already had some weird things going on, the two in Wizardkeep are injecting their Black Metal with even more unorthodox influences. There’s quite a bit of Dungeon Synth being added, but a lot of strange kind of computer game kind of tunes as well. Not quite the 8-bit midi kind of ‘music’, but it has some sort of a cheap fantasy atmosphere – in a good way, though. Whatever way you do look at it, it is definitely not quite your regular textbook Black Metal. It is hard to really pinpoint what is going on, but the band calls it ‘Synth Infused Black Metal Wizardry’. Which is quite an accurate description and covers the music pretty well.

Personally I loved this demo. The fact that they were able to incorporate all kinds of new elements and blend it into something that works remarkably well. I am looking forward to hear new material to see how this progresses. Though it also made me realise I am getting old. I once was the young kid who needed musical teaching from older metalheads, now it seems there is a whole new generation of young musicians who seemingly have a completely different frame of reference. Intriguing. Mind boggling.

At this point, this demo has only be released digitally, but it will be released on physical format too. Canti Eretici will be releasing these twelve minutes of unconventional and fantasy-provoking Black Metal on tape. Suitable for anyone who is in for some variety and surprise.

Oh, and I still don’t know what ‘Daedric’ means…