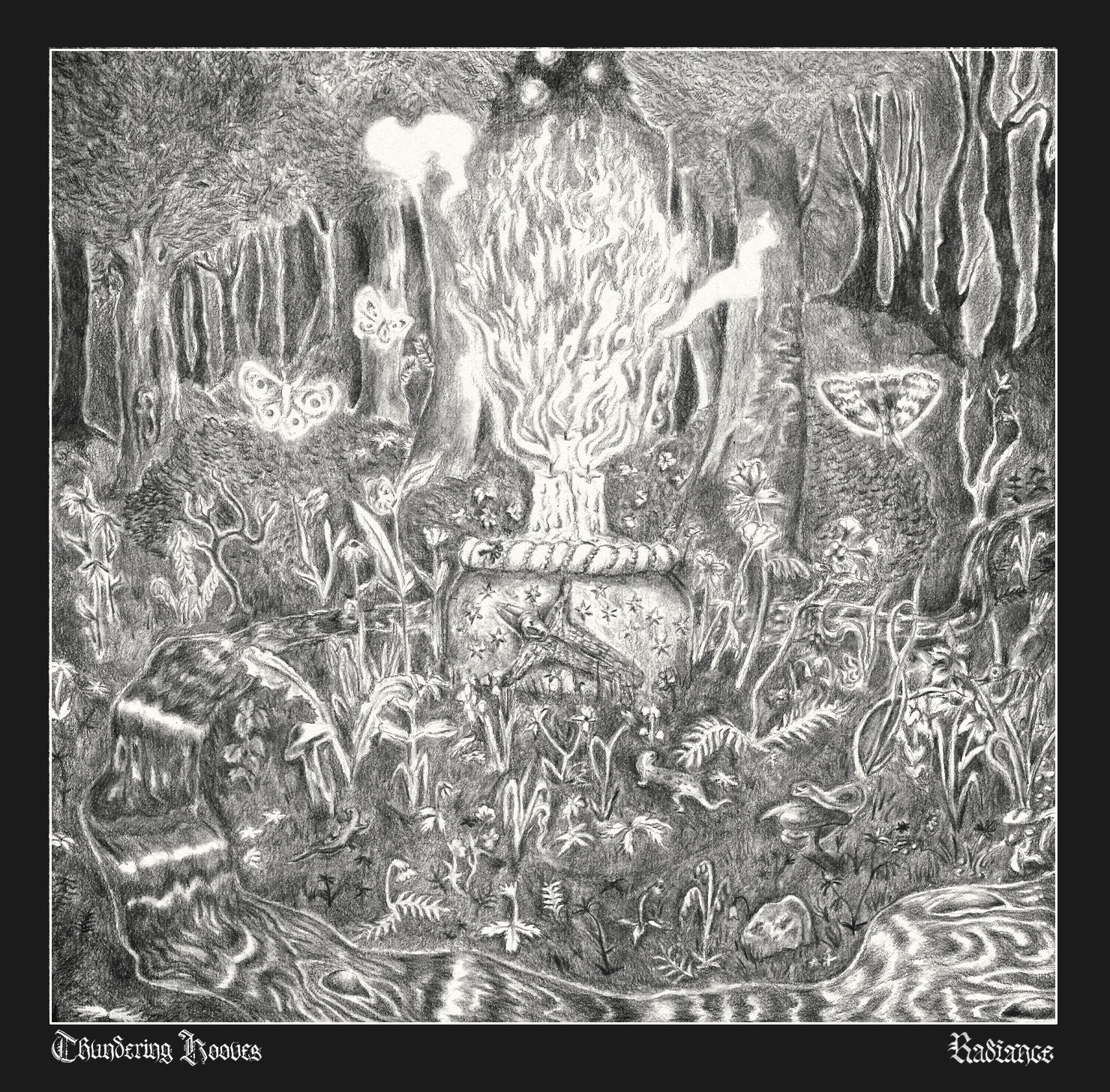 Thundering Hooves, a UK Black Metal duo who take inspiration from weird and folkish horror tales have released their second album in two years, and the mighty Mercenary Press have put it out on both CD and cassette. In a nice touch, opener ‘Embers’ opens with the sound of, you guessed it, thundering hooves as battle plays out all around the rider. From there, bombastic drum tones and powerful guitar leads grow to a quick climax before exploding outwards into a maelstrom of deeply melodic, groove drenched blackened guitar leads, driven forward forcibly by commanding drums and backed by steady and assured bass tones. Of particular note here is the vocal work which drip with venomous scorn and sport a bleak quality to the growls. Furthermore the song opens up into a flurry of brutality but laced with wandering guitar solos and leads as well as melodic undertones and rhythms which as they die out towards to the end of the opening track once more fade into the sounds of on going battle frenzy. It isn’t all swords and sorcery though and there are some straight up Black Metal bangers on this album, such as the very groovy rhythms of both ‘A Howl From the Cloister’ and also title track ‘Radiance’, which packs their riffs with an Arctic chill and more than the odd nod in the direction of the Scandinavian masters, whilst at the same time fused some good old fashioned Death Metal vibes into the mix also. ‘Cloister’ is definitely making my top ten tracks of the year list as it stands, due t it having everything you could possibly want. A catchy intensive melody, crushing riffs and still with the bleak aura that Thundering Hooves still manage to embed in their more head-bangable tunes!

In truth it’s hard to pick out a stand out track on this album despite my previous comments. ‘The True Death’ and ‘Danse Macabre’ both have amazingly satisfying and intensive guitar play that I love, dark, brooding and relentless even in the slower moments. Not only that but the song craft on display here is out of this world and each moments of each song is put together to drag your attention deep into the darkness and hold it hostage until TH are done with it. Finale track ‘The Key’ doesn’t deviate from the bands well played out formula but instead encapsulates everything that is great about TH and ends the album on a powerfully epic note. Nothing more to say, buy this! (Marksson)