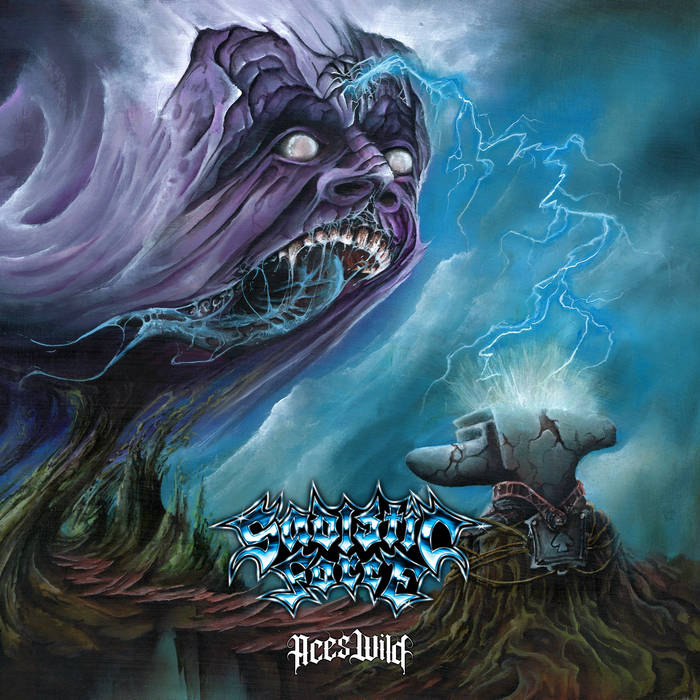 That album art was simply born to grace the cover of an LP. Luckily then UK label Mercenary Press have put out the debut album from Austin, Texas based Black Thrashers Sadistic Force on LP as well as cassette and CD.

Opener ‘2000 Volts’ is a high voltage death ride of maniacal drum tones, a savage flurry of roaring riffs and powerful unbridled vocals that tell the gory details of death by electric chair, and uses some intoxicating rhythms combined with in depth lyrics to bring the subject to life. (Or death) “A new wave of death is now awaiting for you, a machine to usurp the hangman and his noose”.

Tracks such as ‘Cavern of the Wraith’ and ‘Aces Wild’ have a real Southern Gothic flavour, intensely mystifying and with a real catchy vibe that grooves and flows effortlessly and with more of the bands engaging lyrical work that centres on a witchy mystical theme, as well as wild west/frontier based matter with a distinctly deep south touch. Not only that, Sadistic Force have an ever changing sound that flicks and flickers between good old fashioned rock n roll influenced guitar wizardry, to darker, more ominous tones in a seemingly never ending haze of feel good riffs and dark time tones.

Sublimely old school sounding, fast and dirty riffs throughout with an ostentatious amount of guitar solos thrown in for good measure. ‘Aced Wild’ is a thrill a minute theme park ride of Blackened Heavy Metal barbarism that never gets old despite being one hundred per cent old school. (Marksson)