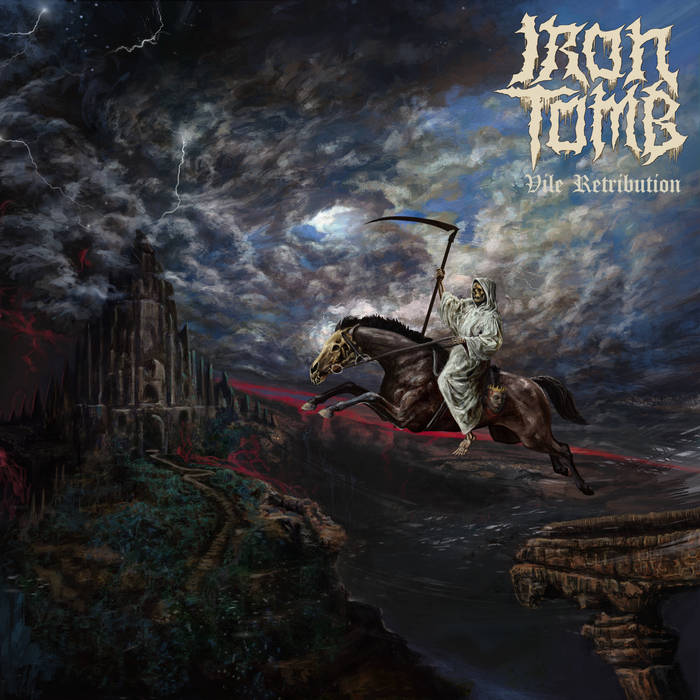 Mercenary Press, the UK label with the incredible roster of talent, have once more unearthed a gem in the debut EP from Birmingham, England’s Death Metal quartet Iron Tomb. Its out on both CD and cassette and comes packaged in some amazing and eye catching artwork.

Haunting monastic droning greets the ears before ripping head first into a punishing solid wall of iron and steel. ‘Pagan Rule’ is a full frontal forward charge into battle with colossal riffs, bombastic drumming and rumbling bass play all colliding into a cavernous maelstrom topped by a full throated growling roared battle cry. As well as the powerful musical feast on offer, Iron Tomb hit the sweet spot lyrically with a step back through the centuries and a clarion call to reject false monarchs and to stand with ancient Pagan Gods. “Into battle, no fear in our eyes. Monarchs behind their ranks, not their guts spilt. Why stand for these men? Choose Gods of old!”

Even more brutal and unforgiving is ‘Wretched Dread’ which chugs and batters your senses while wallowing in the splendour of defeating enemies in the most barbaric of blood lust fuelled ways, whilst ‘Death Immortal’ progresses in much the same way, to the point that you can almost taste the blood on your tongue, the scent of death in the air.

‘Vile Retribution’ is a wonderfully crafted slab of Death Metal, unforgiving, crushingly heavy and drenched in the blood and fear of a conquered nemesis. Through intensive and engaging guitar leads, superbly crafted song writing, and the unstoppable head crushing barbarity from both the man with the sticks and the bass player, Iron Tomb meld together a darkened, catchy, hostile sound with virulent vocals to match, whose lyrics spread like a plague and infest your mind. Not only that, the band have kept with the Death Metal staples of blood, gore and sickness but given the EP a medieval societal angle based upon toppling those in power, as well as instilling a hearty amount of Pagan worship into the mix too.

A brutal debut EP which is written and performed to the highest of standards, and with a historical Pagan flavour. You can’t really ask for more. (Marksson)