Temple of Baal – Servants of The Beast 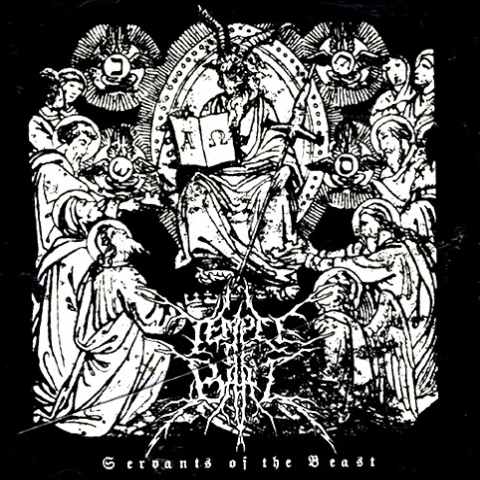 ‘Servants of the Beast’ is the first full length of this French terror squad after the re-release of their highly acclaimed and simply obliterating demo ‘Black Unholy Presence’ by Oaken Shield, the former infamous Chanteloup Creations. The reason why I really appreciated that demo was that is infected with the original spirit of Black Metal, being perverted, sickening, brutal and extremely dark, and fukk, with great delight I may say that the new album has come out as the perfectioning of their style.

The music vomited by Temple of Baal is a powerful mixture of devil worshipping and old school black metal injected with some thrash and ancient death metal in the vein of Hellhammer. It is pure, evil and threatening with a very raw edge and perpetual subsonic bass overdoses. The faster, furious and chaotic parts are masterfully alternated with slow, bone shredding riffing, generating a continuously poisoned, cold and soul-less atmosphere of total darkness and annihilation.

Also the lyrics reside on a higher level than what most uninspired bands release these days, one of them being written by Erik Danielson of Watain who also had a hand in the simple yet effective artwork consisting of blasphemic rituals and blackened cathedrals lending the album a feeling of ancient demonic powers. This destructive piece of vermin is simply mandatory for all those who still breathe uncut black metal and will surely remain amongst my favorites of this year. (Jerre)