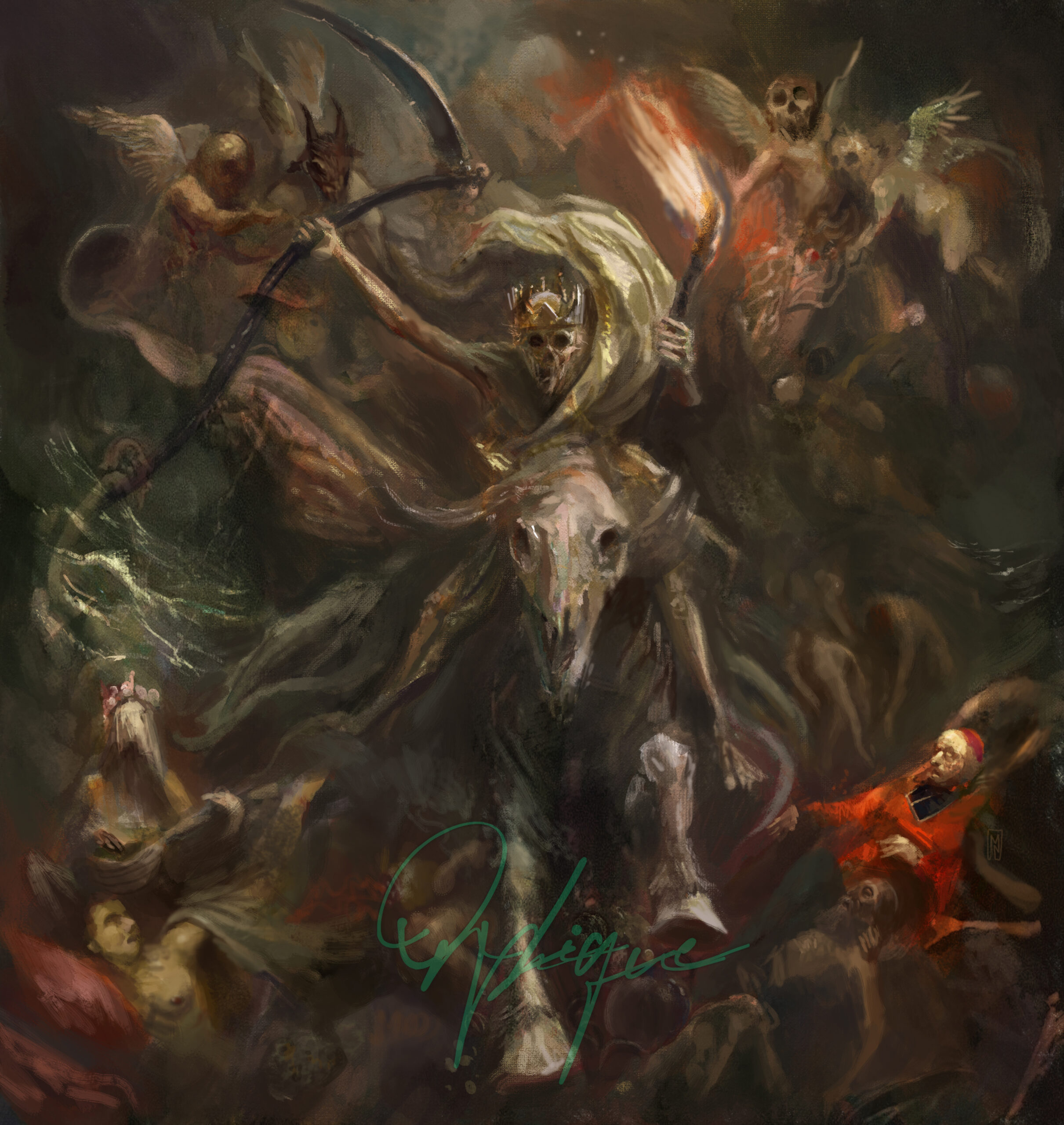 The Black Metal scene in Québec, Canada, has grown out to be one of the most respected, high quality scenes to spawn across the globe. Owing its name to a Forteresse album, the Métal Noir Québécois movement has produced plenty of bands with phenomenal releases, often brought to the masses by Sepuchral Productions. A common denominator between bands from the scene is a great sense of melody and melancholy, sometimes combined with fast paced Black Metal (such as Forteresse), other times more focused on creating bleak midtempo soundscapes (Gris, Sombres Forêts amongst others). While the scene has been blooming for years with many members joining new ventures, sometimes a new band with band members that have not yet established themselves in the scene rise from out of nowhere. One such example is Orphique, the brainchild of David Potter. On his debut album ‘Consécration Cadavérique’ he has surrounded himself with skilled musicians to put his visions into word and music.

The promo sheet describes Orphique as somewhat akin to the ‘Miserere Luminis’ record. This release was a collaboration between Gris and Sombres Forêts, and deserved high acclaim amongst those that cherish the Québec scene. And I can see why this comparison is drawn, as the dreamy melancholic atmospheres on ‘Consécration Cadavérique’ have some clear overlap with ‘Miserere Luminis’. This is in both cases created through a thick and adventurous bass sound, creative drums, and beautiful lingering melodic leads. Orphique also incorporates plenty of acoustic elements and piano, elements that are strongly present on ‘Miserere Luminis’, and in the sound of Gris and Sombres Forêts. However, the music of Orphique is not as dissonant as ‘Miserere Luminis’, and also slightly less bleak. Although I like David Potter’s maniacal screams, they don’t quite reach the tortured intensity on ‘Miserere Luminis’. On the other hand, much more hefty pace changes have been incorporated on ‘Consécration Cadavérique’. Don’t expect it to sound exactly like Forteresse, but for instance ‘Sporadique’ has some intense blasts and the faster parts of a song like ‘Onirique’ certainly approach the style of Forteresse. All in all, Orphique clearly has strong overlap with highly praised acts in the Métal Noir Québécois scene yet finds its own place.

And there are plenty of highlights to be found on the debut album. ‘Sporadique’ holds every aspect that makes the sound of the Métal Noir Québécois so interesting, from lingering melodies, acoustic atmospheric passages, and melancholic piano to ferocious blasting. ‘Chimérique’ is a beautiful piano song with pained screams, the point where the album reaches its bleakest point. And throughout all the songs, it shows that David Potter is a great songwriter who found some highly skilled musicians to put his visions to record. Is it perfect? No, it’s not quite there, especially in ‘Onirique’. The song has great melodies, a fantastic solo and for the most parts is a great representation of the Orphique sound. It’s also the only song that has a somewhat dissonant section similar to ‘Miserere Luminis’. But because that dissonance is so sporadic it feels a bit disjointed. I feel the song would have been better without aforementioned passage. A little later in the same song, a brief pause makes it feel as if the song ended. It certainly fooled me into thinking a new song had started. Let’s call it growing pains in songwriting on an otherwise impressive debut.

Orphique blasts onto the Canadian Black Metal scene with an admirable debut. It combines elements of the faster yet melodic bands with the more bleak and melancholic entities to great effect. It’s hard to beat bands like Forteresse, Gris and Sombres Forêts, and it might not be quite that level yet. But rest assured, ‘Consécration Cadavérique’ is a great debut album that I’m sure will be mandatory listening material to those that follow the Métal Noir Québécois scene with great interest.