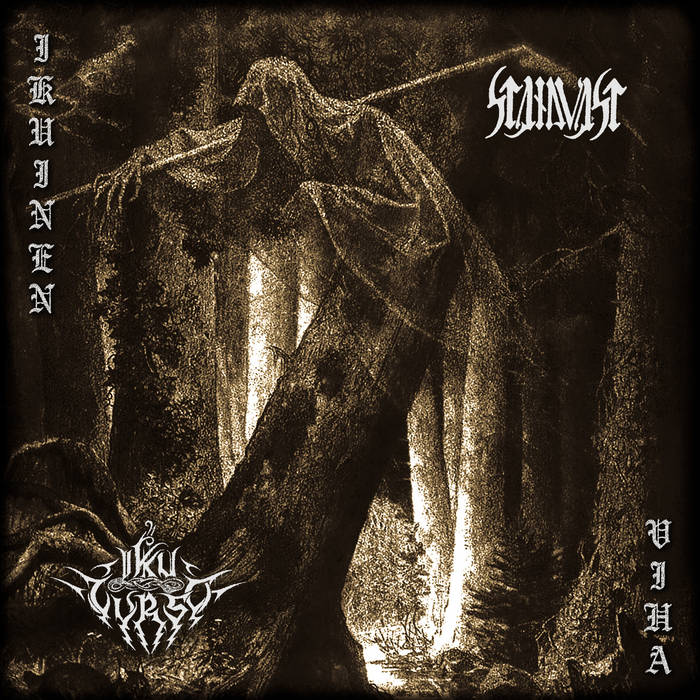 The Finnish/Dutch Black Metal band Iku-Turso shared a piece of vinyl with Kalmankantaja and Goats Of Doom before, so they are no stranger to the concept of split releases. This time they teamed up with Dutch Standvast, which features the prolific Nortfalke, whose work is also heard in bands like Kjeld, Tarnkappe, Salacious Gods, Lugubre, Afvallige, Uuntar and a few more.

Iku-Turso starts off with their track, ‘Suthuru’, which shares more than only one resemblance to Mayhem’s ‘Freezing Moon’. The very first start of the song is so close to that of those Norwegian genre pioneers that I honestly thought it was a cover. It has much of the same guitar tone and a similar sort of haunting ambience. But, while it is hard to name a Black Metal band that was not influenced by Mayhem, in one way or another, this is not a cover song. The song, however, keeps on pulling that same kind of atmosphere of Mayhem’s masterpiece of a debut album, it is far more melodic in terms of the use of keyboards, which gives the song a truly authentic late 90’s vibe.

On the other side we do find Standvast, which is a rather enigmatic Dutch act that finds their influences from a more stripped down, minimalistic and folky approach to the genre. Maybe it is best described as a bit of classic Darkthrone and Bathory mixed with Isengard and Ildjarn, a strong punk vibe, some folky melodies woven into the riffs and an overall abrasive sound. The dynamism is found in the well-written riffs and the nice spoken-word section a bit later on in the song. Standvast might not quite be the band delivering one release after the other, but when they do, it is really worth your time and money.