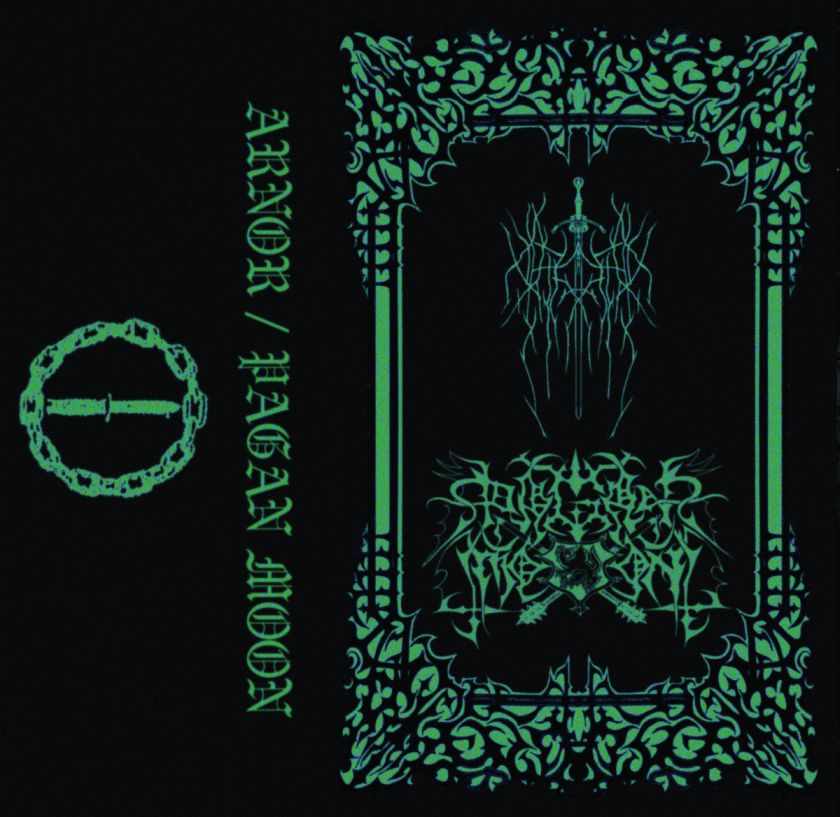 This split includes two American one man Black Metal bands, J.R (Arnor) and LH(Pagan Moon) are the musicians behind these projects from Michigan and Salt Lake City, featuring 3 songs per project.

Pagan Moon is the project who is in charge of opening this split with the song “Blasphemous Necrospells”, which contains raw and fast riffing and the main riff of this song reminds me of Satanic Warmaster, combining the atmosphere with vocals that inspires despair and hatred, with some Darkthrone similarities. It includes some back choruses that give some epic moments to the song and a sinister ambience.

When “Morbid Spirit Sorcery”, the second track, kicks in, I can tell you that this song has a better sound as the riffs can be distinguished more clearly and are dark, cold and evil. The vocals are definitely a really great element of this project as it is very inspiring. The drumming is fast paced and is a good base for the guitar work. It is a quite long track, but it keeps you attached to this discharge of rawness and malevolent Black Metal all the time.

And to finish Pagan Moon´s participation on this record we have “Thy Winternight Torment”, a song that is completely different to the others as it is an atmospheric ambient track, a dark passage that engulfs you in a medieval dungeon like scenario but it is an elegant and epic ending.

Now Arnor appears on scene with the song “Taste of Sanguine Iron”, a song that has very fast blast beat drumming with an impressive fills work, which I dare to call “talented”.  Regarding the guitar work; it has simple but catchy riffs, with some Mayhem’s “De Mysteriis Dom Sathanas” elements along with a raw and aggressive voice on this song. The next song “Operation: counter devoutness” is a minute and a half heavy and distorted passage with a voice that whispers on the back giving mystery and strident atmosphere. To finish the release we have “Weaponized Heretics” where we can hear the drumming skills of the musician behind Arnor again. It is another bestial discharge of raw Black Metal with satanic and killer riffs. As a fact, this split was released under the label Knife Vision in tape format limited to 50 copies, a true underground work.

To conclude I would like to say that these two projects capture the essence of raw Black Metal, with an impressive work regarding the vocals and all the instruments by really skilled musicians. I recommend to be aware of the releases of these projects, true cult underground Black Metal to keep an eye on! (Manuel Sanchez)