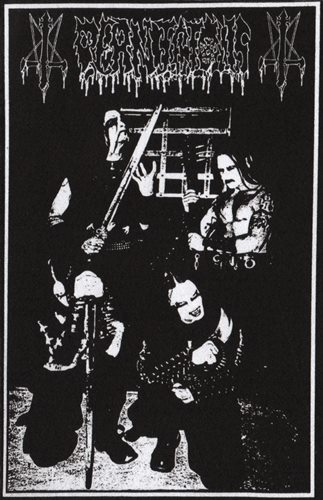 Pernicious was a short-lived raw black metal band from Southern California featuring members of Horror Metal legends Kettle Cadaver (David Vandecar [also of Sol Evil] on bass and drummer Edward Borsheim-RIP) and when I say “raw black metal” I mean absolutely fucking RAW. Garage devastation in full blast. Punky, pissed and ravaging downtuned madness with vocals that sound like they summoned the foulest demon in Hell through the concrete, going apeshit through the mix. Raspy, shrieking growls seething with rage fly over the chugging and blasting backbeat, with primitive pacing like you’d find on early Bathory, Von, or Profanatica. There’s that ugly, balls-out bestial aggression that exemplified those first and second wave black metal bands; “Animal” begins with a proper “OUGH!!” and comes across like a mix of sludgy, grimy, Hellhammer barbarity with a hot injection of Beherit, and indeed it’s some animalistic wildness.

It bears mentioning that although this was released in 2017, it was recorded back in 2002, but you’d swear it came out of the early ’90s. Tracks like “Enemy” (possibly my very favourite song here, with an underlying sense of melodic catchiness and infectious bounce to the vitriolic onslaught) and “Burned” have that scathing, unholy obscurity that just emanates through your speakers like early Burzum or Samael, with that relentless grooving, nihilistic swagger that is so cherished by lifelong black metal fanatics. There are also some parallels to other obscure but integral USBM projects like Cryptic Winds, Masochist and Goatlord. “Born Of” channels the punishing stomp of Deicide’s “Once Upon The Cross”, but with the punky rawness of Samhain. There’s a decidedly occult atmosphere to this slab, and once Pernicious tears into the cover of The Misfits’ bludgeoning thrash-era classic “Earth AD”, your teenage years of reckless anger will come rushing back to hit you hard and you might just give in and tear up everything around you in a demoniacal frenzy. I have to stress the utter rabid edge of these goddamn vocals, this dude was a fucking beast on here. I have heard that there exists some video footage captured from a typically chaotic live performance of the band in its prime, with a literal captive audience fighting through blood, fire and darkness as the players laid waste to all around, and I can only hope that this mayhemic recording comes to light so we can witness that glory in some capacity. But do yourself a favour and seek out and obtain this demo on cassette, cd, or ultra-rare vinyl; it’s a mandatory piece of morbid USBM history.

Last words: A pulverising black nightmare that will strike from the grave. Summon the evil into your soul and experience the undying power of black fucking metal!! (Terrorgasm)