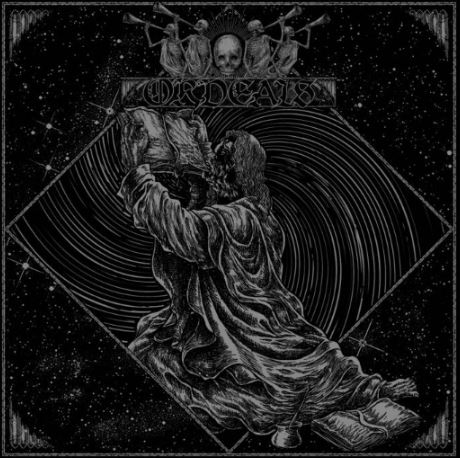 Ordeals are a band from New York, labeled as being a Black/Death/Doom Metal band. This band or project is centered around two main and very talented musicians: the vocalist extraordinary/lyricist Zealous Hellspell (a name well-chosen, believe me!) and Illuminated on bass/guitars, seemingly active in the band Throaat since 2016. Ordeals are completed with session and with live musicians.

A debut EP, entitled “Apotheosis” saw the daylight in 2016 and was met with very positive criticisms, followed by the “Ordeals/Daethorn” split tape on Blood Harvest Records. Knowing the quality of the Blood Harvest releases, my complete and full attention was immediately provoked.

The EP opens with “Ordealsplaga I” – a deep droning intro, where a downright filthy, deep guttural rabid, rotten and seemingly inebriated voice, dripping of puke and slime roars all kinds of ominous revelations to come. All hail the preacher of gore and doom!

Next up is “A Throttled Dream”, a very heavy, thundering and dark black/death song, entirely in symbiosis with the nature of the filthy, low belching and guttural acidic vocals of Zealous Hellspell. Strangely enough, the music is completely intertwined with the sickening vocals. And by the Horns of the Desolate One – it’s a potent wall of tremolo picking Black Metal shrapnel, gloomy heaviness and quite original and grand Death Metal riffing. An ominous spoken passage signals a change into a slower pace towards Doom Metal, providing even more room for the heaviness of the music, before the band picks up speed again. Vocalwise it’s all about death, decay, dying, reincarnation, the futile and disgusting essence of the continuing torment or ‘ORDEAL’ which we call ‘life’.

“Ordealsplaga II” is another prophetic interlude, where Zealous Hellspell manages to scare the living daylights out of the listener with his words of impending doom.

And then: “Choose Death”…a sludgy monstrosity of pummelling metal of death, laced with those perverse vociferations. A masterpiece of Black, Death and Doom Metal. Deep rumbling bass tones and fairly semi-melodic yet lashing/bleak guitar chords provide another slab of mental terror. I don’t know – Zealous Hellspell sounds like a maniacal prophet of doom or the new Messiah for the coming Armageddon. Fact is, that his variety in singing/spewing bile all over the place, ranging from guttural grunts and furious screams, combined with bestial roars and growls lift up Ordeals to a very high level of musical competence.

Whether it is on archaic vinyl or in a digital format, it has been a long time since I heard such a sublime hybrid of goddamn Black/Death & Doom Metal in such an unique and direct form… Usually these types of bands like to soak everything in a lake of reverb and delay… But not this one – Ordeals kick you in the face with a clawhammer. “Nothing lasts forever” screams our Zealous Hellspell. Damn right he is. Let’s hope they manage to compose more of these dark gospels and even a few longer songs for that overwhelming feeling of orgiastic pleasure some of us need so badly.

Never mind my ramblings. “Choose Death” is limited to a mere 300 copies and 100 sold out copies with an exclusive logo patch. Seek out the Stygian Black Hand Bandcamp site for more details or other renowned distros & Ordeals also have their own Bandcamp site regarding the other 2 releases. Just go for it – you’ll thank me later. (LCF)