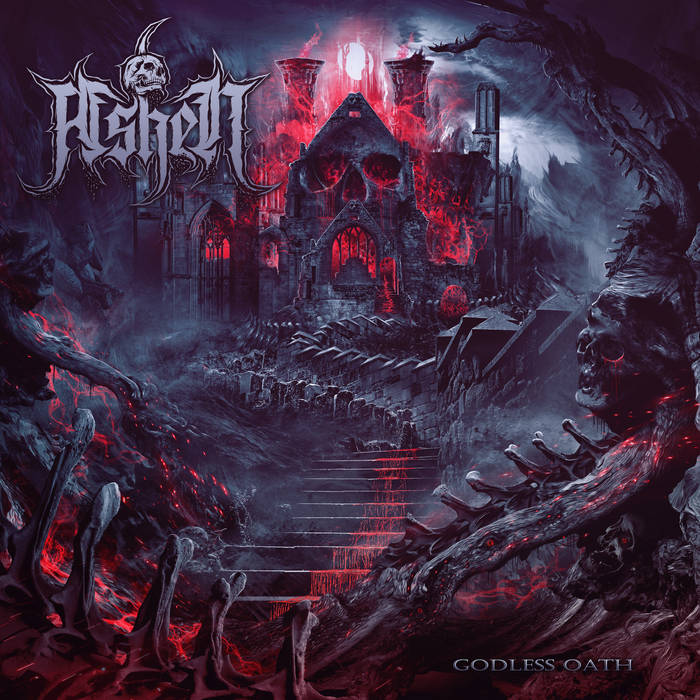 “Godless Oath,” the first release from Western Australian Death Metal band and purveyors of certainly nothing less than outright blasphemy and ill intent Ashen, is the sonic equivalent of being brutally buggered by a bandicoot wearing black boots named Boris whilst bees sting your backside and a black snake bites your balls, I kid you not. Keeping with the “B” theme I have going here, BROOTAL doesn’t even rate.

This bile filled beauty, although at only five songs long is enough to bend bricks and break the will of the most belligerent bettong you have ever bloody met, and is a right bastard of a thing that should be played at the highest of bellicosity! Yeah okay I made that word up but I can’t find a word for volume starting with “B.” Any uber nerds out there that have any suggestions please let me know on the VM Underground fan page on Facebook. Wait. We don’t have one? Probably a good thing really!

At only five songs long (which is a damn shame, but it is only an EP) this fucker STILL manages to kick you right up the clacker (and here you where thinking I’d say backside, but I’m over the “B” words for now,) and if I had to choose a few tracks to discuss let them be these.

The first one that really gets the old ticker pumping, and don’t for one minute think that they ALL don’t. I am only speaking from my end of the spectrum, is Track 2 “Mass Cremation.” Both vocally and musically this thing is basically a rolling ball of flame the size of a planet that disintegrates everything in its path. “Burn them to ashes – consecrate, The total cleansing of the flame, The agony of true infliction, Forever, futile certainty.” Sheer magnificence for any lover of the Death Metal kind of thing. The song writhes and scalds as it moves across the now blackened interior of your mind, and the bass tone contained within is just fucking leaden utter bastardization put into musical form.

The second one after explaining the above is a cheery little ditto named “Asphyxiant,” and it is indeed as truly and awfully suffocating as you would hope it to be. Don’t be fooled by the calmish opening, give it a minute then suck in a deep breath as Ashen gives us all a good solid hammering. “We are the sons of night, Born just to die, Veil of this hollow deprevation” is as fine as an opening line to a song that embraces the nihilistic nature that inhabits us all, and when followed with what I suppose we could call the chorus, “Suffocating, Asphyxiant, Drown in the blood of the innocent” Pretty much to me throws down the proverbial gauntlet as far as the department of “FUCK ME THIS IS HEAVY SHIT (FMTIHS for short) goes and gets. A song of such magnitude, one just has to kick back and bask in its eternal glory.

So, there you have a hint of what is on offer. And yadda yadda yadda can’t wait to hear more (insert the usual review lines here.) This one is a right fucking belter. FACT. Why with all the “B’s” you probably are still wondering and possibly scratching your backsides whilst doing so? Simple really, this album has been released by up and coming Aussie label Bitter Loss Records, and as in my usual style, I had to pick some sort of angle for my bullshit and buggery believe me!

Get some! (The Great Mack)