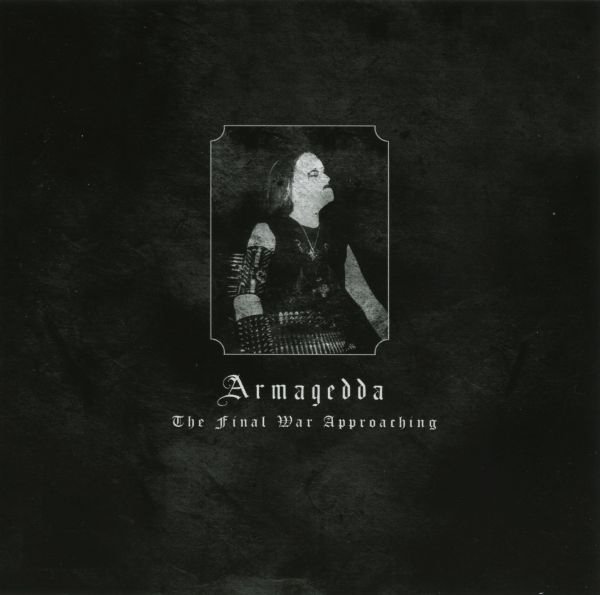 Actually, black metal is going strong these days. A lot of bands from the early ’90s have either sold out, moved on to trendier genres or at least withdrawn themselves from black metal (call it what you want). Some people see this as a bad thing; I have come to see it as a process of purification. The ‘new’ black metal underground is composed of dedicated individuals operating in a separate circuit and propaganda is coming from all corners of the world. That includes Sweden, one of those countries where almost all bands play in exactly the same style and use exactly the same studio and generally sound pretty boring (examples: swedish DM scene *twice* (in Stockholm and Göteborg), swedish black metal, etc.)… this is not the case with Armagedda, however.

The black metal here promises sweet satanic bliss for the thirsty ear… I am charmed by the no-frills approach of this band: the CD starts immediately with ‘Deathminded’, raw and spirited black metal pretty much in the vein of Darkthrone, era ‘A Blaze In The Northern Sky’. Well, Armagedda probably draw less upon Celtic Frost and more upon sheer black metal. Production is crisp and raw, with a bit of crackling in the guitars, as if the atmosphere is laden with ozone or something… this is augmented by the harsh, throaty (and slightly distorted? — not sure) rasp of the vocals. The album is not a blastfest, often sequences of mid-tempo crunching are separated by short intervals of a blastbeat. No melodic interludes, no showcase technical playing, just proud and fierce black metal as it should be. There is not much else to say about ‘The Final War Approaching’ except that it accomplishes what it set out to do: providing a soundtrack for the Final War in which judeo-christianity shall perish! (MaartenDJ)