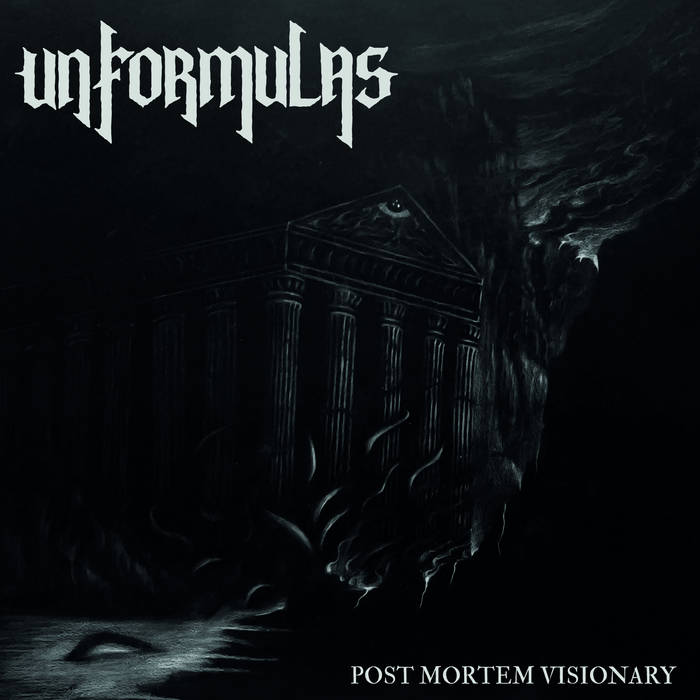 Ljungskile is a small Swedish town due north of Gothenburg and is home to multi-instrumentalist Nicklas Rudolfsson of Runemagick and Heavydeath fame amongst many others, as well as vocalist David Nilsson of Dwoom, Feral and Mace ‘n’ Chain. Together they have formed a new project called Unformulas and at the back end of last year unveiled a superb new album entitled ‘Post Mortem Visionary’; an Epic Death Metal release that has been co-released on CD by both Aftermath Music of neighbouring country Norway, and Mexican label Ablaze Productions.

From the very first moments of opening track ‘Uncontrolled Unformed’, Unformulas seek to cast an appalling gloom over the world about them, and they succeed in extinguishing the sunlight through a bleak concoction of creeping, ominous percussion, lurking, poisonous vocal work and the heady mixture of trembling, unhinged bass tones and chugging, crushing riffs. Just in the opening track Unformulas move through myriad phases of resplendent throbbing groove, eerie nocturnal melody and savage, debilitating heaviness. Each track in this fifty minute monolithic album takes the listener on a journey that scales incredible peaks of cavernous, brooding guitar leads, before plumbing the depths of misery and despair through the use of sparse, callous rhythms and drum beats. The bands minimalistic, almost ritualistically slow and crawling pace casts an all encompassing pall of gloom, evil and spite. And on top of that are the menacing, calculating vocals that seethe with barely supressed rage.

If I’d have had this album last year it would have shot into my top five for the year. Sadly as I’ve missed that particular bus it will have to be a belated honourable mention. Do not sleep on the cloying, pervasive atmosphere that the Unformulas debut casts!