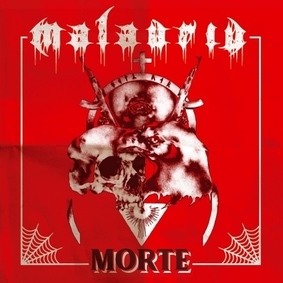 Malauriu (“Ill Omen” in Sicilian) is a fairly overlooked but fairly well-established and very promising black metal band from Sciacca, Italy that just released their first full-length album back in late 2017 after a spate of singles & splits; it was a rollicking yet ritualistic blend of third-wave Scandinavian and Slavonic styles, very hooky and darkly engaging material delivered with their own Old World sapore, all tracks in the native lingua. 2018’s follow-up EP introduced new vocalist A. Venor who brought a more acerbically bestial dynamic to the lineup, headed as always by songwriting mastermind Asmodeus Schizoid.

The Morte EP (with some fantastically evil cover artwork by Maxime Taccardi) starts out with an inauspicious intro track, consisting of samples of bleating goats and ominous chanting over some sinister synth, and while I can appreciate intros as a mood-setting device, especially for this style of music, at two minutes in length on a 19-minute EP it somewhat overstays its welcome rather than successfully building any tension or suspense. The first track proper, “Vortex of Supremacy”, blasts straight into third gear though, and delivers a caustic dose of raging, demoniac black metal which more closely resembles the subgenre of “War Metal”, with tinges of death metal and grindcore.

Venor’s approach to the mic compliments this voracious strain of hellish black metal quite well. The feral assault here is reminiscent of Swedish innovators Grotesque’s raucous hits like “Blood Runs From The Altar” or “Church of the Pentagram”, while still retaining the elements of Dark Funeral, Hecate Enthroned, and Inquisition that were present on the preceding album.

The next cut, “Revenge of the Shadows” definitely has a heavy imprint of the latter band, which holds well with the Satanic occult aura (although the lyrics are entirely undecipherable, and I’m not sure even what language is being used, although this is the first release to feature English titles.) This is a slower number, but picks up the blasting in some sections to maintain the listener’s interest, along with extremely guttural gurgling vox, insane tremolo riffing, and some much welcome cowbell.

“Behold the Damnation” tears back into the raw, primal detonation of war cult ballistics, and employs a killer riff which unfortunately gets run into the ground for the duration of the five minute track. I get minimalism and simplicity, but just a little variation would make it much more effective and less enervating. Still, Venor’s maniacal rasping, roaring, and shrieking (evocative at some points here of the late great Seth Putnam from Anal Cunt) is enough to pick up the slack. Also, to be fair it really is a great riff, frosty with early Darkthrone bite. “Cornucopioides” is just another instrumental bookend which closes out the CD with some ambient noise featuring dissonant jazz horns which reminded me of some of John Zorn’s less manic moments, but really doesn’t add much to the release.

Overall this is still a worthwhile listen, and while I would recommend starting out with the full-length “Semper ad Mortem Cogitantes” for listeners new to the band, it’s cool to see them going in this new and more raw-and-aggressive direction. Their discography (including some more recent short-play output) can be purchased from their bandcamp site, or from their label Southern Hell Records.

Ultimate Ululation:
Relentless fury of abomination; dive in headfirst to this putrid miasma, or hold out for a larger deluge…. Either way, Malauriu is a commanding force to behold. (Terrorgasm)