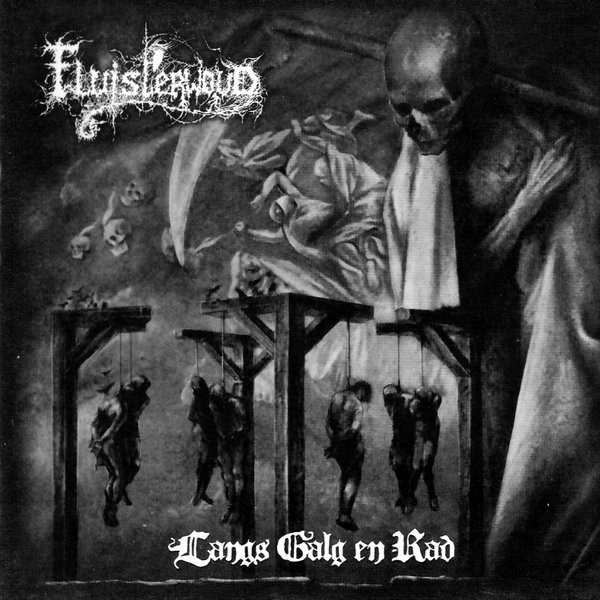 After the demo ‘Een Sinister Schouwspel’, the unreleased split CD with D.R.E.P. and a lot of delay, Full Moon Productions finally released ‘Langs Galg en Rad’. I must say that this is an album that appeals to me quite a lot. The first time you listen to this album, the furious black metal might sound a bit chaotic and unoriginal, but it reveals its strong points after listening to it a few more times. This is absolutely not chaotic, the playing is tight and the drummer keeps the music in the right track. As is usually the case with black metal, the guitars are rather thin, but the bass compensates this somewhat by playing other parts than just thundering along with the guitars.

Although regularly on high pace, Fluisterwoud builds in the necessary variation with more midpaced, atmospherical parts. My absolute favorite track in this case is ‘Hoer van de zeven hemelen’. Coming to that, I must say that the lyrics in Dutch sound quite better that most other bands I’ve heard singing in Dutch. The lyrics aren’t forced but sound rather natural. Singer Sagelinge has a nice rotten voice, reminding me of a combination of, oh I don’t know, Nocturnal Culto and Abbath Doom Occulta or something. The CD version contains one cover, ‘Aardmannen’ by Lugubrum, sounds good, maybe even better than the original. On the vinyl version of the album, which isn’t out yet, you’ll get an extra cover version of ‘Unholy black metal’ by Darkthrone. After 36 minutes the party’s over and I must say I wasn’t bored for a moment. Could take a lot more of this. (Stijn)