Cerberus – My Prophecy Will Come 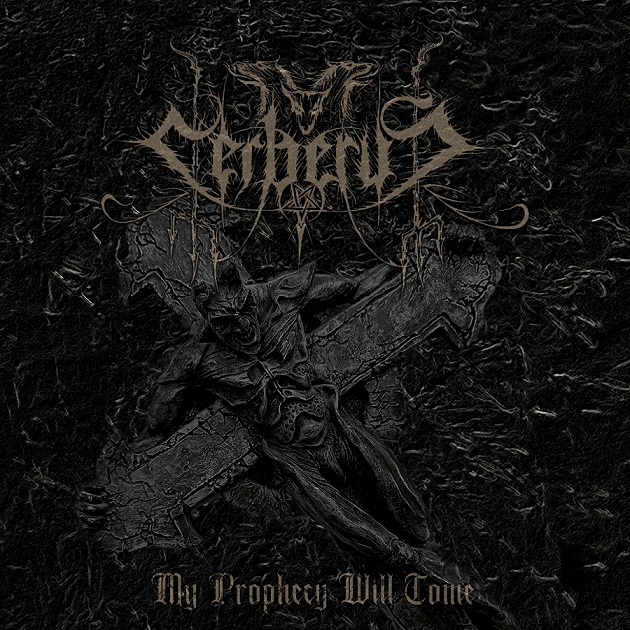 In my opinion more Black Metal should have a clarion call of triumphant horns randomly blasting away in the background of an album! or in this case maybe they call out to announce the return of German one man Black Metal band Cerberus, whose hiatus of sixteen long years has been broken by the unleashing of a long awaited third album. Entitled ‘My Prophecy Will Come’ and with a sound somewhere in the region of a Dimmu Borgir meets Satyricon hybrid, Schwarzdorn Production has seen fit to put this one out this October.

Some of you may be rolling your eyes by my lazy journalism in comparing this to two massive names within Black Metal, but it’s the genuine vibe I get. There are definite symphonic overtures on display with the afore-mentioned horns that adorn many parts of the album sounding majestically in the background, whilst the sheet catchiness of the guitar leads and the memorable lyrics (And the fact that you can clearly hear most of the lyrics) in my humble opinion definitely tips it’s cap towards Satyricon.

Where ‘My Prophecy Will Come’ differs from those two Black Metal stalwarts can be heard within the slow, grinding guitar leads of the album title track as well as ‘Fight For Me’ which have a far more abrasive and intense sound. Vocally Beleth (the man behind Cerberus) is very impressive and can spit out blood curdling growls when called for but his usual style is a rasping cloying snarl. The drumming too is impressive, save for a the odd missed beat here and there, and acts as a cacophony that simply adds to the overall grand atmosphere of the album, alongside some impressive guitar melodies and subtle synth tones.

‘My Prophecy Will Come’ is a deeply impressive return for Cerberus, an album rooted deeply in Satanic lore and the entire release has a dark foreboding presence about it. It has it’s little flaws in places but nothing that really detracts from what is a very listenable slice of grandiose Black Metal. (Luke Hayhurst)