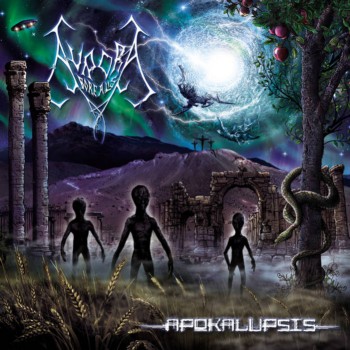 After a nice little intro piece concerning a bit of a sci-fi take on all things biblical, Maryland’s Aurora Borealis launch with great gusto into this, their 7th release since formation back in 1994. What we have here folks is a mix of many styles, mainly Black and Death, delivered with a particularly old school kind of tone. Guitars range from the absolute flat out to some really cool fat chunky riffing layered over with a bit of twiddly diddly lead work. Opener “Even Angels Sin” leads the assault from the heavens leaving you in no doubt whatsoever that this is gonna be one hell of a ride. All the other instruments follow suit with the guitar work, one minute blessing you with their precision and the next throwing cold hard slabs of maniacal insanity your way, and right before you the Apokalypse unfolds.

The vocal work is impressively sinister and Demonical, or maybe has the sound of the wrath of Angels depending on which side of the battle you are listening to. Yes, this is a concept album, and the basics are it’s a war for the control and ultimate destruction of the Human Race by all means possible throughout the ages, well that’s at least what I have gleaned anyway. This is by far too short a space to go into the finery so I will not, suffice it to say that the delivery of this tale is in itself nothing short of epic.

At times oddly enough this reminds me a little of Hoth, with similar song structures delivered amongst the all too terrifying mayhem. Atmosphere is in no shortage at all, take the gargled and somewhat otherworldly sounding moment of “Dozakh” as a fine example. This piece is also sandwiched perfectly between two tracks of the utmost finery, those being “Sarkikos” and the cruelty of “Magor Missabib”. These two also bring to mind Cradle of Filth during their “Damnation and a Day” through to “Thornography” period. Nothing to sneeze at my friends, quite impressive stuff for mine and fuck the haters.

“The Great Expanse” is a spectacular display of riffery and how to write a song that just demands you hit repeat. A riff fest of immense proportion and superb pacing indeed.If this thing was actually let loose on the population of any planet you choose one can guarantee there would be few survivors such is it’s sheer ferocity. Title track “Apokalupsis” is a living breathing testament to both old and new school ways of approaching Metal, not merely asking you to pay homage, but demanding every last piece of your mortal soul, and you will gladly give it trust me. The closing track “Lo-Ruhamah” actually left me feeling a little flat to be honest after all the craziness at hand before it, but that is in no way a bad thing, for it does indeed prove the calibre of the material that comes before it.

All in all, a very fine piece of musical storytelling, and although it may take me awhile to dig even further into it’s great depths and almost universe sized vastness, I can assure you that the effort will be well worth it my friends. Prepare thyself for the Apokalupsis! (The Great Mackintosh)