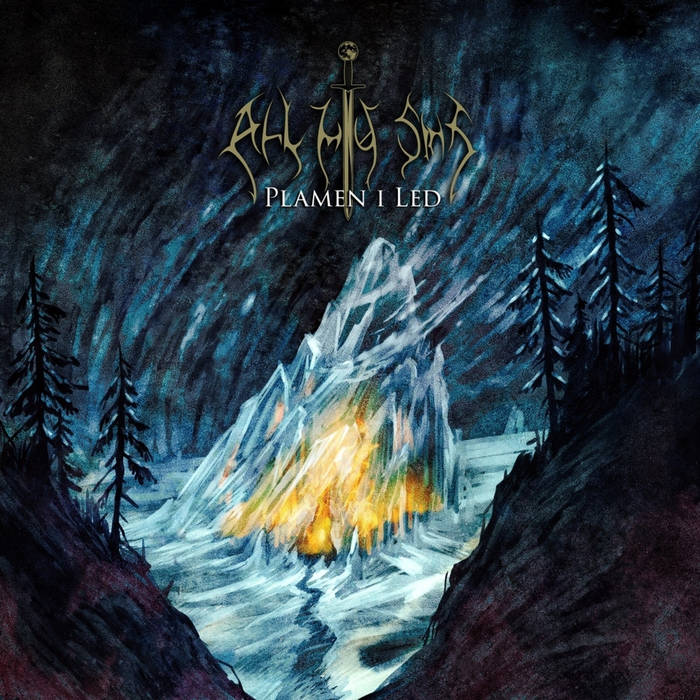 All My Sins are a Serbian Black Metal duo who have a history dating back to the year 2000, and have had a sparse release rate over the years. What drew me towards reviewing the bands 2020 EP was that All My Sins take inspiration from the history and culture of the South Slavic nations, and the fact that this EP features just three songs; two of which are cover versions of tracks by a dark-Arts band from the old Yugoslavia back in the 80’s called Luna, and Russian band Old Wainds. As well as that, the third and final track is a re-imagining of their own 2004 track ‘Where the Wild Winds Blow’. Released on CD by Russian label Casus Belli Musica, ‘Plamen I Led’ (This translates from Serbian as Flame & Ice) has wonderfully evocative cover art that was created by Vladimir Prokofyev.

So let us take this EP one track at a time, starting with a piece of Yugoslavian musical history in ‘Ogledalo Lune’. This track is impressively rendered by All My Sins. It builds slowly through minimalist use of guitar chords, percussion and whispered vocals, increasing in pace incrementally before a brief pause, and then straight into a highly melodic blast of grandiose Black Metal complete with accented, abrasive vocals mixed with tribal chanting, an icy harsh guitar melody and fearsome bombastic drumming. Just as quickly as this extravagant sound appears it then reverts back to its crawling pace and spartan tones, before once more rising again into blackened pomp and ceremony. An excellent track, one of stark contrasts and engrossing harmonies.

On to the Old Wainds cover of ‘Daleko od juga’ which again features an impressive drumming style but this time there is no build, just straight into a mid-paced flow of methodical drum tones, bleak, measured guitar melody and serpentine rasping vocals, which are joined by a backdrop of long drawn out chanting vocals, adding a cold yet rich layer of atmospheric wonder to proceedings before the song opens up violently into a flurry of blast beating frenzy and grinding riffs. A great choice of song to cover; not only a juxtaposition between the harmonic and the savage, but also one that contrasts well against the opening track. Props for the prominent bass work on this one too which rumbles away majestically when the faster speeds are hit.

Last but not least we have the bands own work with a their 2020 re-imagining of ‘Where the Wild Winds Blow’. This is a fast paced extravaganza of furious swirling guitar tones, a soaring drumming display and charismatic ravenous vocal work with flourishes of catchy groove drenched melody and more ambient undertones that combined sum up everything about All My Sins; their penchant for the theatrical yet understated pageantry, their blazing aggression and their softer, more thought provoking style. The ‘Plamen I Led’ EP is a must own piece of work, wonderfully performed and imaginatively re-enacted into the bands own style. I’d highly recommend checking out their back catalogue too because this is a band with a lot to say about their native land and its history and culture.