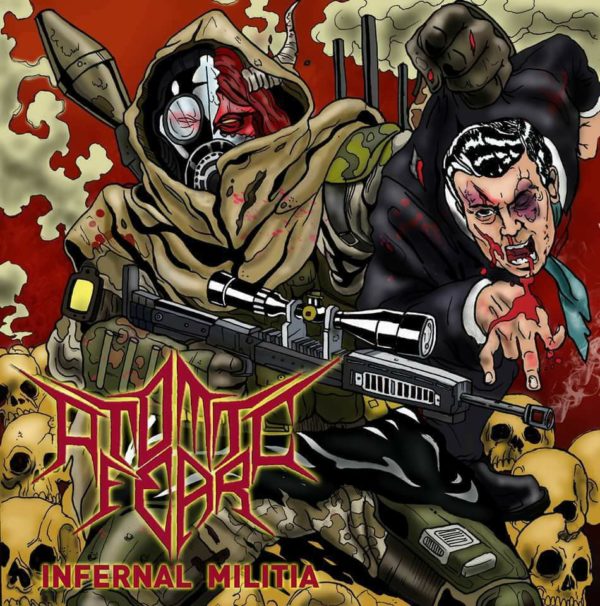 I’m surprised by this release for two main reasons; it is a debut album and because of the excellent music featured. Atomic Fear is new a band from Mexico and with no doubt they are highlighting among the crowded Thrash Metal scene, the reason is more than easy: killer execution on every instrument and they are offering a fresh sound to the style!

“Infernal Militia” is the title of this album full of high quality music and decent musical skills; I enjoyed listening every track a lot because this band sounds like no other, let’s clear something since now: Atomic Fear plays strictly Thrash Metal with the following properties: technical rhythm changes and an interesting and variable speed; I would invent and give the Nobel prize to the drummer, this guy behind the drums deserves an important recognition because of the important and original beats, at least he caught my attention since first listening. The powerful guitar riffs are not less important, guitarist knows to be on time along with drums and bass keeping precise tempos, I mean there is like a unique connection; believe me, guitar riffs here are variable all along every song, fortunately this is the kind of bands that use to include guitar solos on most of the tracks. There is a good Thrash Metal executed here, they keep the same level on every song and as I said before, they make of the style a fresh sound, like a reinvention.

Atomic Fear deserves a good recognition because they released an almost perfect debut album which is a very good first step. I noticed some remarkable influences such as Nuclear Assault and Sacred Reich. The production is not much professional but acceptable, it is clear and strong. Keep an eye on this band if you are looking for different Thrash Metal sounds. (Homer Nava)