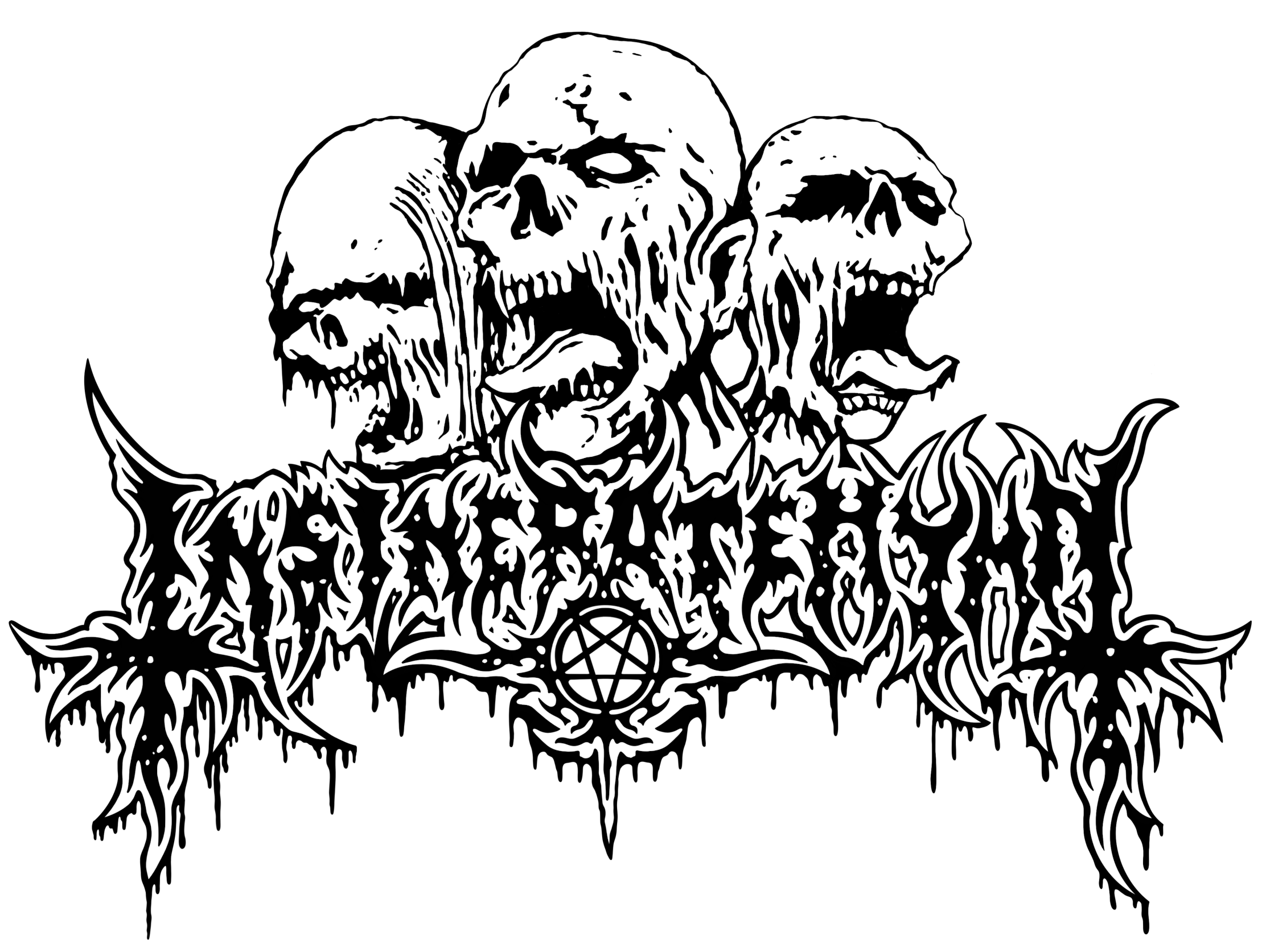 With “Disembodied” Insineratehymn released a more than fine second album, which “rips through all spectrums of Old School Death Metal in a skillful and thoughtful way”. You may understand that I consider that as an invitation to send some questions over to Abraham Garcia (drums) to get the band and its activities introduced to you all…  (Ricardo)

The band started in 2016 with at the time our former vocalist Mauricio Lopez and myself (Abraham). Being diehards like many others we just wanted to write our own music and see where it went. I got in contact with Demitree Rivera through social media. Frank Montero and our first bassist Miguel Martinez were bandmates from our first band “Transcendence”.

What about Death Metal intrigues you? Which bands grabbed you by the throat and influenced you with the sound and songwriting within Insineratehymn?

Personally death metal to me is unique in the sense that every band sounds different from one another and that diversity is what got me hooked. I enjoy bands that have direction. Personally death metal is about pushing the boundaries. There are many bands that helped with Insineratehymn’s songwriting from Swedish Death Metal bands such as Carnage, Nirvana 2002, Necrophobic to American bands like Monstrosity, Sadistic Intent etc. 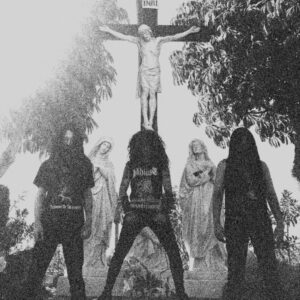 Before we start on your own music, in your opinion which historical release or releases absolutely defines the genre you’re playing? Is it Deicide’s ‘Legion’ or Monstrosity’s ‘Imperial Doom or maybe an Immolation demo, Malevolent Creation’s debut? Something else?

Definitely Monstrosity’s “Imperial Doom” is a big influence on the band along with “Millennium”. Some other releases would be Sadistic Intent “Impending Doom” & “Resurrection”, Hypocrisy “Penetralia”, Desultory “Intro Eternity”, Carnage “Dark Recollections”… the list goes on.

Let’s take a moment to talk about your debut release “A Moment in a Vision” which was released on CD & Cassette by Narcoleptica Productions, Analog Overdose Records & Rotted Life Records…

I would like to get new art and a remaster on our first album. I feel it deserves better effort as we did with our 2nd album. “A Moment in a Vision” is definitely straight forward compared to “Disembodied” but we still feel it’s a solid release. I wrote a majority of the songs for that album and the guys helped with making the changes and adjustments needed to make them better. I was listening to Carnage, Edge of Sanity & early Unleashed during that time and thats the result I got from those influences. We received a good response and were glad it got picked up by Rotted Life Records.

Why have you decided to record a debut full-length right away, without releasing a demo or EP first? Just opportunity or is there another reason?

We were originally going to release a 4 track EP but ended up just going with a full length. 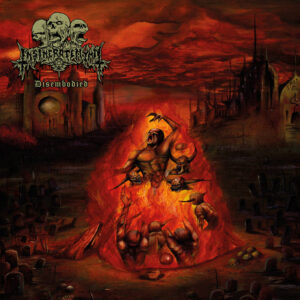 You’ve recently released your 2nd full length “Disembodied” (CD & Cassette released by Blood Harvest & Rotted Life Records)…
Writing “Disembodied” was magic. The goal was to write a record with direction. Not only did the bands that we were listening to help write this album but also hanging out with Skeletal Remains during their rehearsals was also a big help. Those guys shred and being around musicians who push themselves is going to influence us to do the same. We’re glad we got to work with Charlie Koryn on mixing and Julian Silva on mastering. They captured the sound and direction we were going for little bit of notes were made. Edgar Roldan painted the cover. The message I think is obvious, it’s a soul trying to escape from being taken to hell.

“Disembodied” has more direction than “A Moment in a Vision”. Our goal was for every song to have a different tempo not just for the album but also for a live setting. “A Moment in a Vision” we feel is still a solid album but definitely more straightforward. We still play “Enigmatic Voyage” and “Seeking Immortality” as we feel those hold up the most to the new material.

Demitree and Frank write the lyrics. We like to write about dark topics whether it be the occult, spirituality or experiences. There’s plenty of evil in the world to make into a song. Lyrics are important to us to give a song the feeling it needs to be. Not just the words but also the patterns in how those words are executed.

The feedback on this album has been incredible. We’re very happy everyone who’s listened to it is enjoying it.

What are your expectations for Insineratehymn in the future? Have you already written any new songs for example?
We have plans to expand the band into other countries. “Disembodied” is opening doors and we’re really happy there’s fans that want us to come perform. We have a new bassist, Nicolas Poblete. We have started to write new music and so far what we can say, it’s going to have more direction and be heavier than “Disembodied”.

You are also involved with Violent by Nature. Any news to tell our readers about it?
Nicolas was a member of VBN. However, I came across him on Instagram because of his covers and a fan of ours also recommended he would be a good fit for the band.

Are you involved in any other way in the music scene?
Not at the moment. 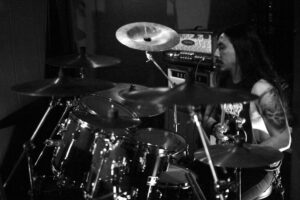 Are there any bands or albums of your recent playlist you would like to mention? A rediscovery, an overlooked gem or an unsigned demo band that deserves attention?
Some of my favorite upcoming bands are Laceration, Decrepisy, Mortal Wound, Of Feather and Bone and I recently discovered The Ruins of Beverast at MDF. Some classics I’ve been revisiting are Unleashed “…And the laughter has Died” EP, Crematory “Denial” EP, Immolation “Dawn of Possession” & Morbid Angel “Blessed are the Sick” to name a few. A gem I feel readers should check out is Crucifixion “Paths Less Taken”.

Also do you have favourite labels you always keep an eye on when they announce a new release? Or a favourite illustrator / cover artist?
Some labels, distros and cover artists I keep up with are 20 Buck Spin, Blood Harvest, Dark Realm Records, Tank Crimes, Headsplit Records Mark Riddick, Dan Seagrave, Wes Benscoter, Defame etc.

Before we wrap up this interview, do you have any final words or thoughts? Is there something I’ve forgotten to ask you which you would like to mention? Thanks for your time!
We want to thank every sick motherfucker for supporting the new album, Blood Harvest & Rotted Life Records! Thanks for the interview. Cheers!