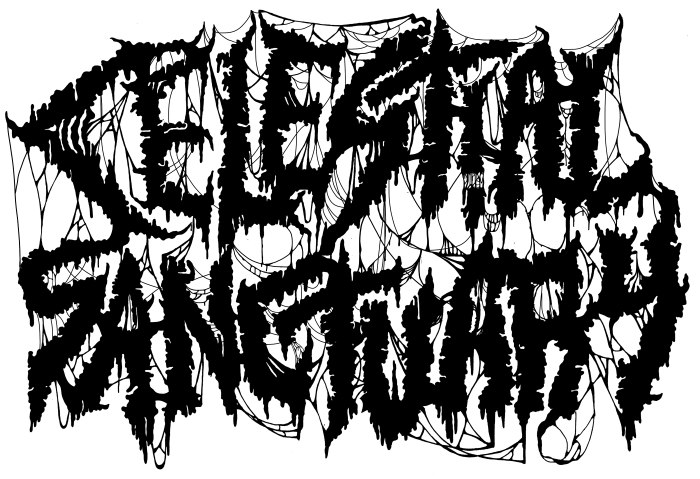 Always fun when a bandmember approaches you and says “hey, would you like to review our demo?” and when you hear it you’re nodding along, the riffs are effective and afterwards you’re glad you were approached. That is what is going on with Celestial Sanctuary and their “Mass Extinction” demo, which was influenced by Autopsy, Bolt Thrower, Carnage and early Entombed. As you can see quite a distinguished quartet and reasons enough to ask Tom to introduce his creation… (Ricardo)

Sure – so it started off as just me. I just had a vision I wanted to execute, so I laid some demos down and then recruited the other guys from there. I’ve known all of them for years, be it from being in other bands with them, seeing them at other shows or even going to the same college.

The main reason for starting it, is that I just thought the UK had become a little stale. It seemed as though it was the same 10 bands playing every show – that’s changing now. But yeah, I just wanted to put my spin on things and try to help inject a little life into it. It seems a bunch of others had the same idea as me, as there seems to be a bit of a resurgence of killer, fresh new bands cropping up in the UK! I honestly think there is going to be a new wave of British Death Metal and it’s going to fuck you all up!!!!

What appeals to me most is the DIY ethics and enthusiasm that this scene and the people in it have. I think that went away for a little while, but with the (I hate this phrase) ‘Old School Revival’ happening in the US I think things are getting back to their roots and on a large scale across the world. Just to be clear – I’m not saying that completely went away, but it’s definitely on an upward trajectory. The scene as a whole just makes people feel welcome and that any of us have a fair crack at the whip without too many gatekeepers y’know.

Shout out to labels like Redefining Darkness, Me Saco Un Ojo, Blood Harvest, Desert Wastelands, Maggot Stomp, Sewer Rot – who are giving the bands a platform and taking the risks to put stuff out physically – which is HUGELY important. 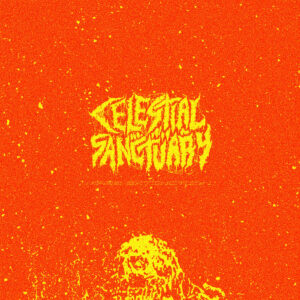 Your first release is the “Mass Extinction” demo, which received some high praise here at VM-Underground.
I still rate them songs – so much so we recorded both of the songs for the album haha. But yeah, I think they’re just simple, straight to the point, knuckle dragging songs. That was recorded in my basement. It’s pretty good – I live out in the middle of nowhere, so I can make as much noise as I want.

And you also have a released a new single, digital and self-released, called “Koalemos”.
With ‘Koalemos’, that was written and recorded right at the start of lockdown and while the world seemed like it was ending because of COVID – and people were acting like fucking idiots, so it was kinda about that and how peoples respect for each other and the world just goes out the fucking window the minute things don’t go their way. But yeah – reactions to that have been really positive too. I think I’d been listening to a lot of doom and sludge when I wrote that, so I think it comes out in the riffs a little bit…or a lot.

Lyrics are all written by myself [TOM]. And yeah – there’s a very strong concept behind it all. A lot of the lyrics are written from the perspective of a being that’s suddenly become sentient, and essentially realising they’ve been bred for some horrible thing (it’s never addressed directly, but it could be for slavery, for food, for sex, to right wars – you can make that part of the narrative up yourself) and are powerless to it. That’s essentially the concept of the album.

The lyrics are very important to the band. I think more and more bands are stepping away from the ‘extreme’ gore or just trying to be gross y’know. Like…Cannibal Corpse and Mortician have done that the best it can be done, so what’s the point in even trying (although Sanguisugabogg and Undeath are giving them a good fucking run) But yeah – the lyrics definitely feed into the over arching theme of the band and it’s specifically something I wanted to say when I started this project.

How did the co-operation with Brutal Cave Productions occur?
They reached out to us, almost immediately when the demo dropped. Same with FHED (I think they both emailed us the same weekend). Both great bunches of people – and super enthusiastic. Again, have great DIY/Punk ethics and are doing what they do purely for the love of the genre.

How about the future of Celestial Sanctuary? Can you tell us something about new material?
Yep! So the album is written & recorded and is currently being mastered (hopefully that’s been announced by the time you release this…if not…surprise!). The songs are very much a continuation of what we’ve already been doing. There’s a few more complex riffs and dynamic bits – but overall it’s feral death metal with a bunch of doomy sludge riffs thrown in to make you gurn.

Just want to carry on writing music and putting out cool shit, and play shows wherever and whenever we can. 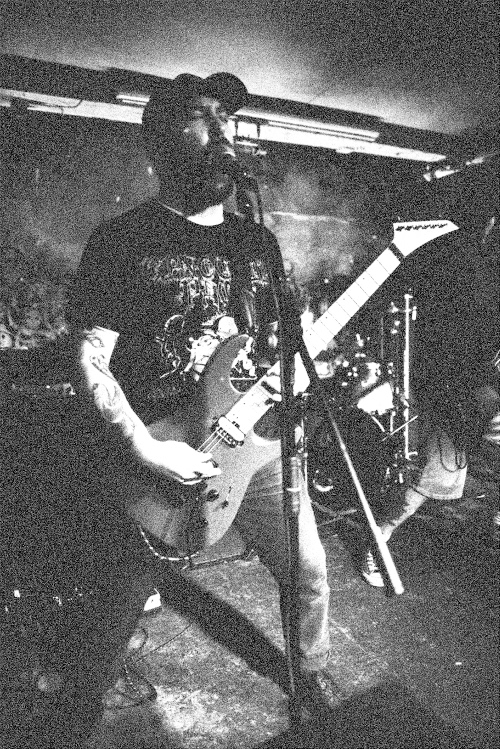 Are there any bands or albums of your recent playlist you would like to mention? A rediscovery, an overlooked gem or an unsigned demo band that deserves attention? Any other bands of your region of the United Kingdom that are worth mentioning and to check out for our readers?
Ah shit. I could literally go on for hours – as I said I think there’s been a massive resurgence in AMAZING Death Metal recently, and I just downloaded the Bandcamp app to my phone, so literally every day there’s something new. But key ones would be:
Vacuous, Ritual Of Decay, Cryptic Shift, Slime Lord, Soul Devourment, Frozen Soul, Torn in Half, Warp Chamber, Sanguisugabogg, Torture Tomb, Kommand, Kombat, Maul, Phobophilic, Gutvoid, Cryptworm, Clairvoyance are all on constant repeat!

Thanks for your time! Have I forgotten something to mention, if so…feel free to drop it here…
Just…support Death Metal, smash racism, fuck sexism, save the planet and just be fucking cool. That’s all ya gotta do.